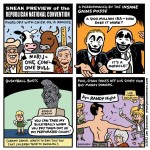 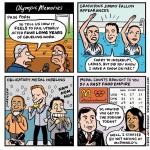 McDonald’s being the official restaurant of the Olympics is a bit like XBox being the official study aid of the National Spelling Bee. But, of course, the biggest crime of this year’s games coverage was the omission of Ray Davies from the U.S. broadcast of the closing ceremony.

This Week’s Cartoon: One Weird Trick 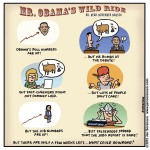 The “one weird trick discovered by a mom” meme has persisted for a while now in the illustrious world of web ads. And it’s not just moms — all sorts of ordinary folks are coming up with strange tips and tricks for our collective benefit. Just a few weeks ago, I spotted a rather paranoid ad that read: “47yo patriot discovers ‘weird’ trick to slash power bill & end Obama’s power monopoly.” (I’ve heard Obama accused of many things, but being an electricity cartel kingpin is a new one.)

I wonder how this trend came to be. Was there some marketing study on the clickability of different phrases, and “weird trick” came out on top? Especially if the weird trick came from moms, dads, patriots, and other salt-of-the-earth folks? The implicit rejection of professional expertise here frankly says a lot about our culture. Don’t need no fancypants scientist telling us how to lose our flab!

In 2011, the Washington Post reported on a Federal Trade Commission investigation of the “tiny belly” ads; they’re the front end of a highly profitable scheme involving a large number of dubious dietary supplement companies. The fact that anyone is seduced into giving their credit card numbers to these people boggles the mind. 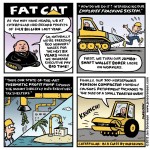 As if we needed any further proof that trickle-down economics is a joke, along comes massively-profitable Caterpillar’s decision to freeze the wages of its Joliet, IL factory workers from now until the cows come home, and then some. Meanwhile, the compensation for Cat CEO Douglas Oberhelman shot up 60% in 2011, to $16.9 million. It’s not like the workers were being lavishly paid, either; the top tier had average salaries of $55,000 before overtime.

Unfortunately, I can’t boycott Cat, as I won’t exactly be in the market for a knuckleboom loader anytime soon.

In response to the recent Austin Chronicle story in which I was interviewed about the future of alt-weekly comics, an editor who publishes my work wrote me this noteworthy email:

I read the article about the decline in political cartoons in the alternative press, and as usual, there’s a tragic flaw in the reasoning for getting rid of comics to cut costs.

By dumbing down the print side of their publications, publishers everywhere are destroying their own industry.  If anything, the logical response to online competition would be to add *more* comics, columns and thought-provoking material to keep readers loyal.

We’ve taken that approach at Northern Express and the print side of our business is thriving.  For what it’s worth, we sometimes run more pages now than i’ve seen in the Village Voice, and our geographical area encompasses a population of under 300,000.

Meanwhile, the daily in our town has gone all-in with the online delusion and has gone from a staff of 12 reporters to 3.  What publishers don’t realize is that their online presence should be the gravy on the potato — not the other way around.

Thanks for indulging my favorite pet peeve.

Well-put, methinks. To be fair, I understand that not every market is the same, and I know some editors have cut comics due to space issues when they truly didn’t want to. But considering that we live in an increasingly visual age, and political satire is popular, I suspect comics cultivate regular readers better than… well, a lot of other things. 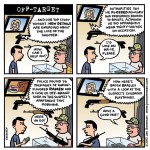 This week’s cartoon: “As the Mitt Spins”

Interesting questions have been raised about whether Mitt “retrocatively retired” from Bain so he could keep his wife’s health insurance coverage while she underwent treatment for MS. The Romney campaign won’t respond, which gives us a license to speculate. Of course, Romney is one of the few people who could actually afford to pay for MS treatment out-of-pocket. But given his aggressive efforts at tax avoidance, one suspects that he doesn’t like to part with money if he can help it. Unless he’s buying a car elevator for a ridiculous beach house.

The Austin Chronicle recently spoke with Tom Tomorrow and me about the future of alternative political cartooning. Also includes my thoughts on Austin and a photo of me in front of some Futurama graffiti (Captain Zapp Brannigan’s crotch, to be specific.) 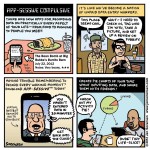 This cartoon probably comes off as more curmudgeonly than I am in real life, since I’ve been a little app-sessive myself lately. I’m a fan of Evernote, which I use to jot down cartoon ideas or information while I’m on the go. Recently, Evernote released specialized apps for remembering meals and people you meet, both of which I would probably find cool and useful. But then I got to thinking: how much time do I really want to spend interrupting life in order to peck away at my phone? Can one no longer enjoy an immersive experience with a plate of Drunken Noodles without getting all meta-noodly?

Last week’s Affordable Care Act ruling overshadowed the Supreme Court’s other recent doings, such as its reaffirmation of Citizens United as it smacked down Montana’s campaign finance law. If only the Court’s radical bloc cared about protecting ordinary humans as much as corporate campaign contributions. But here’s a thought: If corporate cash is the same as speech, then my health is also speech because being healthy allows me to speak. So anything that interferes with my health, such as insurance companies denying me coverage, is an affront to the First Amendment. Put that in your pipe of illogic and smoke it, Scalia!

I was going to be interviewed by the AP today about my response to the Supreme Court ruling, thanks to the health insurance comic I drew for Kaiser Health News. After preparing some remarks, I was told that the article was running long and they didn’t need further commentary. So, in an effort to make ye olde proverbial lemonade, I’ll share my thoughts here.

Like most people, I was stunned by the ruling.  I never thought I’d say this, but it’s possible that John Roberts just saved me a shit-ton of money. Believe me, I have no love for private insurance companies, but the mandate is a positive step forward as we work toward single-payer.

At the same time, I don’t particularly feel a sense of relief. I’m dreading the ongoing political battles that lie ahead, and wish this could just be over. The mandate will be framed as a burdensome tax, and ACA supporters need to make very clear that it’s a cost-control measure that ultimately benefits us all. It’s a way of improving a grossly inefficient system. (Also, people: please stop using the stupid term “Obamacare.” Have we not learned anything about framing in all these years?)

Another reason I feel uneasy is that the SCOTUS decision was a frighteningly close shave — the other four justices would have struck down the act in its entirely! That’s radicalism in your face, and it’s something we’ll have to contend with for a generation or more. But for today, I’ll let myself celebrate.