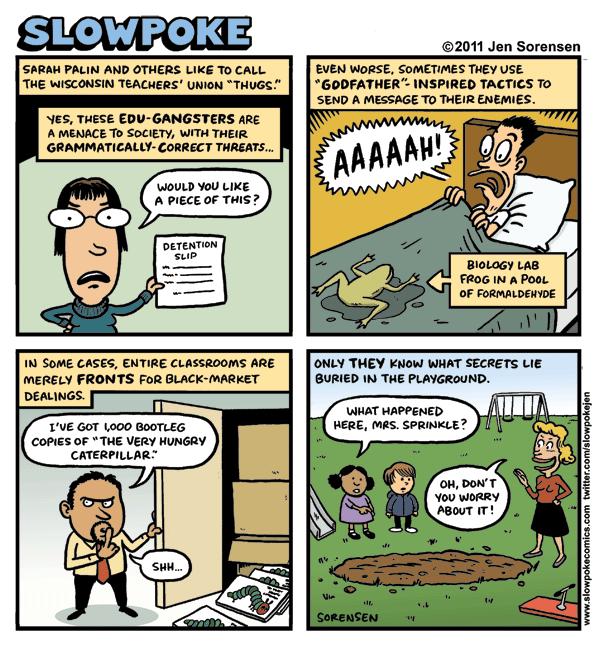 As the daughter of teachers, I find myself more incensed by what’s happening in Wisconsin than I’ve been about anything in a while — and there’s been plenty to get upset about. Last week’s coldhearted maneuver by the Wisconsin GOP was bad enough, and then that vapid, braying dipstick Sarah Palin — the opposite of education personified — went on TV (wearing a jacket from the set of “Star Trek,” I might add) and called the teachers’ union leaders “thugs” after the Wisconsin Republicans received a death threat:

“Well, these union bosses that are acting like thugs, as they are leading some of their good union members down a road that will ultimately result in, unfortunately, somebody getting hurt,” Palin said… ” it is these unions bosses’ responsibility to turn down the rhetoric and start getting truth out there, so that nobody gets hurt.”

Good one, Ms. Blood Libel! Of course, Palin is hardly the first to try to smear the WI protesters as “thuggish” despite amazingly peaceful demonstrations, so it seemed appropriate to draw a cartoon reminding everyone that these are the people who taught you to write the alphabet. They are not thugs, unless boring you to death with quadratic equations counts as thuggery.

Adding further insult to injury, Gov. Scott Walker actually had the gall to spin union-busting as “progressive” and “innovative.” Um, no.