« Shootings over cartoons: A cycle of sadness
Useful Tips from Senator Joni Ernst » 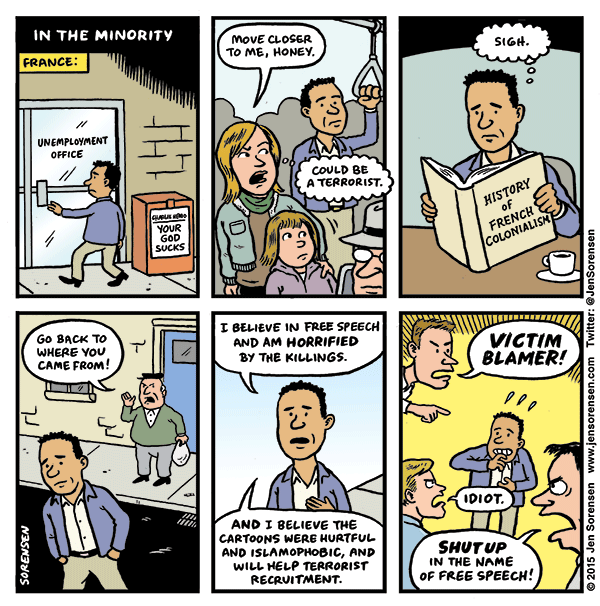 I spent a lot of time last week reading Muslim cartoonists’ responses to Charlie Hebdo, as well as interviewing some myself. Many hold complex views like the one in the fifth panel of this cartoon. All support free speech and deplore the attacks, despite having varied opinions on Charlie. Many operate under threats themselves. Some mention cartoonist Naji al-Ali, who was assassinated in London in 1987. Most Westerners don’t even know about this.

I haven’t seen any cartoons yet from the perspective of a French Muslim immigrant wrestling with these difficulties. One Charlie cover, in reference to killings of Muslims in Egypt during the 2013 coup d’etat, showed a Muslim man holding a Koran, both being sprayed with bullets under the caption “The Koran is shit.” Were this a Jew holding the Talmud, we would rightly recognize that as anti-Semitic. To say such a cartoon in this context is only about religious cosmology is a narrow, literalist interpretation worthy of our current Supreme Court. Religion and identity are hopelessly intertwined here, amidst a backdrop of history that hasn’t always been pretty.

I’ve seen a number of statements to the effect that we cannot — must not — talk about the Charlie Hebdo cartoons because that would be tantamount to blaming the victims. To be clear, I disagree with the Pope’s oddly-pugnacious phrasing that if one mocks religion, one can expect a punch. That’s a very unsettling way of putting it that excuses violent behavior. I do, however, agree with many Muslim cartoonists that we can blame the terrorists AND exercise our freedom of expression to talk about the cartoons. We can hold these two thoughts in our head. They are not mutually exclusive.