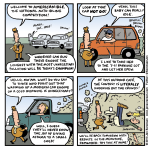 Postal Service of the Future 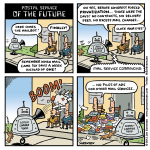 Conventional wisdom seems to be that the financial difficulties of the Post Office are due to the rise of email. The Postmaster General noted this himself as he announced the end of Saturday delivery. But to only look at competition from email is to miss the larger ideological picture — namely, that privatizing USPS has been a goal of market absolutists for decades. The real “crisis” faced by the PO is the absurd requirement, set by Republicans in Congress, that the agency fund retiree benefits for the next 75 years — paying for future employees who haven’t even been born yet! This article on Alternet provides an overview of how the service is under attack. Never mind that the Postal Service isn’t taxpayer-funded; privatizing it is still part of the Cato Institute’s agenda. It seems obvious to me that replacing USPS with a patchwork of private mail delivery companies would be an unmitigated clusterf#ck. Believe it or not, the private sector is not always the most efficient (see: health insurance). 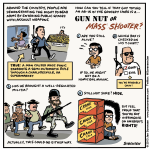 I’ve actually been to the Kroger supermarket in Charlottesville where a 22 year-old man made national news by waltzing through the store with an AR-15. He has since been banned from the premises. I mean, really. If I see some random person with an assault weapon in a public place, I’m not waiting around to find out what their intentions are. 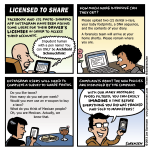 Related article here. I use both Facebook and Instagram with the awareness that my data is being mined in probably unimaginable ways, but asking for driver’s licenses (or birth certificates!) is a bridge too far. Especially for people who use a pen name or stage name for professional reasons, or reasons of personal security.