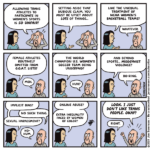 Right-wingers who never seemed to give a damn about women’s sports before are suddenly filled with concern for the well-being of female athletes. Frankly, they can take their hypocritical faux feminism and cram it. You don’t get to use the fight for gender equality as cover for your own bigotry against trans people. 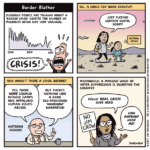 At some point recently, an idea emerged from the fetid bowels of right-wing media that there was suddenly a “border crisis” and that it’s all Biden’s fault. If you look at the actual data, however, the recent rise in border apprehensions began under Trump, well before Biden took office, and the numbers are not terribly out of line with past cycles. These three handy Reuters charts put everything into perspective (the first panel of this cartoon is based on the “total apprehensions” chart).

I make light of militias here, but the fact that I’m even joking about them is a sign of a serious problem. These fringe groups used to be rightly kept at the margins of society; now, with each passing day, their extremist ideologies grow ever more mainstream. Unfortunately, it seems as though there’s a great momentum towards forgetting that the government was almost overthrown, and moving on to stupid stuff. 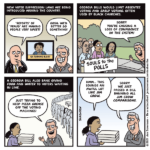 The despicable bills targeted at Black voters in Georgia should be the biggest news story in the country right now. And yet, in a demonstration of the power of right-wing media, it seems more people are talking about a ginned-up “controversy” over cartoon characters, which is much ado about very little. (Love Dr. Seuss, fine with retiring the old racist stuff, maybe we should recognize when we’re being led around by the nose and stop taking the bait?) 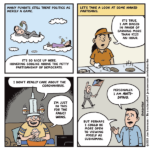 I’ve had this quibble for a while now that the language used to talk about political activism by Democrats or progressives often assumes a partisan motivation — that people are acting out of team loyalty or an abstract “agenda” rather than, you know, trying to survive. Last weekend, a Maureen Dowd column in the NYT was widely ridiculed for some fairly out-of-touch scolding of Dems for media criticism. Dowd railed against a perceived expectation that the press “suit up for team Blue” — a phrase that struck me as emblematic of how entrenched the “both sides” paradigm is, even after one side violently tries to end democracy.