It goes without saying that in a country awash in mass shootings, a teenage boy waving an assault weapon around in a crowd, or firing any shots, is going to scare people. Someone is going to risk their life to stop him and protect others, not unlike the passengers of Flight 93 who were lauded for charging at the 9/11 hijackers. Now we have a recipe for intimidation and chaos. And nothing on the horizon to address it, as far as I can tell. 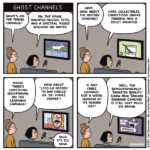 All shows and subjects mentioned in the first three panels of the comic are taken from actual programming on these channels. Most readers will view this strip as non-political, but I think the increasingly unscientific and dumbed-down programming we’re seeing on cable ties directly into politics. It represents a total breakdown of Enlightenment empiricism. If all of this supernatural stuff is happening while scientists say it isn’t real, why trust them about anything? Obviously THEY are hiding something they don’t want you to know! Why believe what THEY say about COVID or climate change? Or who won the 2020 election, for that matter? 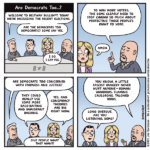 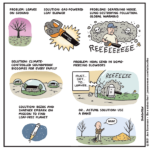 Longtime readers know that I despise leafblowers, and have drawn several strips about them over the years. I had been debating whether it was time to do another comic on the subject when a reader shared an essay in the NYT by Margaret Renkl entitled “The First Thing We Do, Let’s Kill All the Leaf Blowers.” I already knew about some of the quoted statistics, such as the Edmunds study that found a Ford F-150 Raptor pickup created the same amount of emissions driving from Texas to Alaska as a half hour of yard work with a crude two-stroke blower. I hadn’t heard that gas-powered lawn equipment now creates more ozone pollution in California than the state’s tens of millions of cars.

This is also very much an environmental justice issue; blowers emit carcinogenic benzene and lung-damaging particulate matter, as well as cause hearing loss in workers exposed to them all day long. Powerful electric alternatives now exist.