This Citizens for Ethics site breaks down exactly which companies are giving to anti-democratic politicians.

One of the great mistaken ideas of the Cold War era is that privatization and capitalism go hand in hand with the flourishing of democracy. That “free markets” (a gross misnomer if there ever was one) necessarily lead to “free people.” In the 21st century, it has become abundantly clear that an amoral system of incentives designed to maximize shareholder profits is not going to save us from authoritarianism. 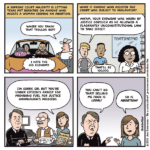 That the Supreme Court would not intervene to stop this radical embrace of vigilante justice hearkening back to the Fugitive Slave Act should send chills down everyone’s spines. To be clear, I am not advocating for vigilantism against the Supreme Court in the cartoon, but rather imagining how they would feel if this sort of “justice” were applied to them, and showing the absurdity of bounty hunting everyone who “aided or abetted” them. 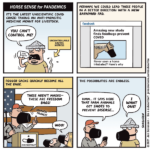 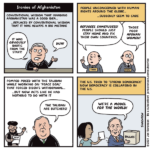 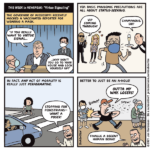 Simply put, “virtue signaling” is a noxious term that provides a false explanation for people’s motivations to do the right thing for themselves and others. Sure, there are a few corporations pretending to be socially conscious while supporting racist, anti-LGBTQ politicians. But framing all attempts at ethical behavior in this way is a kind of mental trick that benefits the bullies and fascists. It’s yet another way to demonize progressives and sound policies without engaging on specifics. 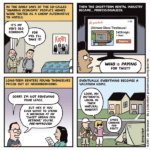 Whenever I look at Airbnb listings, I’m amazed by how expensive some of them are. People are apparently paying big bucks these days for flashy, Instagram-friendly “experiences.” In many tourist areas, long-term renters are getting priced out. Part of this is due to the raging real estate market — though the money to be made these days from short-term rentals can quickly outpace income from traditional tenants. This isn’t exactly helping to stabilize things for working people who just need a home, not an experience. 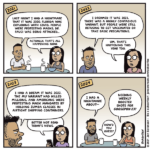 So the Delta variant is surging across the US, with Florida actually breaking last year’s hospitalization records. While the vast majority of those hospitalized are unvaccinated, this variant does have the unfortunate effect of turning people into highly-explosive virus volcanoes. By ending preventive measures prematurely, we’re creating ideal conditions for ever more dangerous variants to evolve. 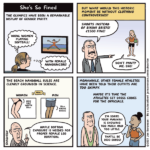 Given the increased respect for women’s sports, it was especially absurd to hear that the Norwegian women’s beach handball team was being fined €1500 by the European Handball Federation for wearing spandex shorts instead of bikini bottoms. To be clear, the team wore shorts at the European championships in Bulgaria, not at the Olympics. 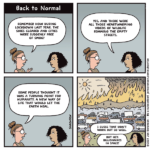 I’m not suggesting that the climate crisis would end if billionaires abandoned private space flight. I am saying that they are the grotesque embodiment of a sociopathic gilded age, narcissistic pig-men who have a moral obligation to end the system that enabled their stupid fortunes in the first place, as Jeff Bezos’ ex-wife MacKenzie Scott is admirably trying to do. 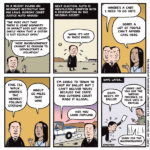 Arizona has a terrible history of suppressing Native voters that bears more than a little resemblance to the Jim Crow South; it was one of the states required to get preclearance from the Justice Department to make any election law changes under the Voting Rights Act, until that rule was gutted by the Supreme Court in 2013. The laws that were recently challenged forbid ballot collection by third parties (who had assisted Native voters living in remote places far from polling centers) and invalidate all ballots that go to the wrong precinct. This apparently happens with some regularity among reservation dwellers who do not have a regular street address. This Washington Post article about the obstacles faced by Native voters provides some useful background.

How to Relax this Summer 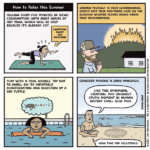