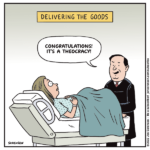 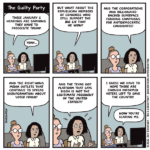 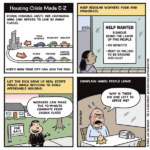 This particular doom spiral, which once seemed relegated to a handful of hip cities and resort towns, has seemingly spilled over into just about anyplace you’d want to live now. I don’t mean to pin personal blame on particular kinds of workers, but the widening gap between jobs that can cover the cost of living and those that don’t. (I realize not all tech workers and realtors make tons of money!) The ultimate irony of this dysfunctional system is that eventually the “essential” workers disappear, leading the obliviously wealthy to lament that poor people are “lazy” and don’t want to work anymore. 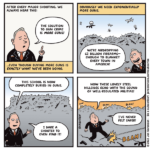 Blanketing America with guns is the logical endpoint of calls for ever more guns, the folly of which was demonstrated at the school in Uvalde where cops with guns failed to stop a bad guy with a gun for over an hour. 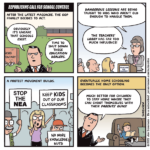 After I drew this cartoon I found out that some Republicans are, in fact, calling for homeschooling as a response to mass shootings in classrooms. Apparently someone was making this argument in The Federalist. Homeschooling advocate and ’80s teen heartthrob Kirk Cameron is also trending for his outlandish comments about public schools. So, as is often the case these days, my comic is not really that great an exaggeration. (I’m not necessarily opposed to homeschooling in all cases, though as the daughter of teachers and a graduate of a public high school and university, I am a staunch defender of public education.)