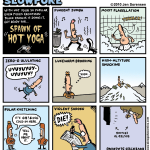 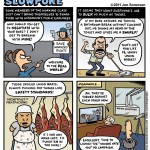 Okay, okay, I know I said I was going to blog from the Association of American Editorial Cartoonists convention, but I truly didn’t have a moment to spare. Considering that my primary activity consisted of stuffing my face with food and drink, I’m not entirely sure you needed a play-by-play anyway. Here, then, is an executive summary of Important Convention News, from a me-centric perspective.

I was nominated for the Board of Directors. I guess this marks the start of my political career. Today the AAEC, tomorrow the halls of Congress! Or at least Assistant to Tri-Cities Deputy Comptroller.

I was interviewed by KBOO. This is Portland’s community radio station. Matt Wuerker and I were interviewed for a show about cartoonists, to be aired sometime later this summer.

Me in front of the funkily-painted KBOO studios.

I drank wonderful beer. At Bailey’s Taphouse, I had something called a Block 15 Super Nebula Bourbon Barrel Imperial Stout. This big, bold beauty is aged in oak barrels, boasts 11% alcohol, and will generally blow your socks off. That’s Ted Rall’s arm behind the glasses.

A special shout-out to Kevin Moore and his wife Jenn for hosting Mr. Slowpoke and me.

Oh yes, almost forgot to mention here that there’s a very nice interview with me in the new issue of Bitch magazine. Print only!

This Week’s Cartoon: “The Tale of Tarball Timmy” 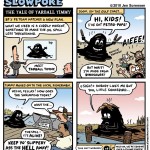 One thing I don’t get about this whole oil spill fiasco is why BP insists on denying or downplaying scientific facts about the leak. I’m sorry, I mean the death fountain. It’s not like we aren’t going to find out that there are, in fact, giant billowing plumes of schmutz spiraling out into the Gulf six ways from Sunday. We’re well past the point of spin here, BP! Seems like they’d have less of a PR problem if they just said “Yeah, we really screwed the pooch on this one. Words can’t even express how awful this is. We suck.”

In other news, I’m off to Portland OR tomorrow for 3.5 days of drinking with the nation’s editorial cartoonists. I’ll try to post from AAEC as I can.

I’ve been too busy with real-life stuff this week to do much babbling on the internet, but a few items caught my eye that I simply must share with you.

It was those matching funds that produced a challenge from well-financed candidates, backed by the Goldwater Institute and other conservative interests. The candidates argued that the matching funds “chilled” their freedom of speech because they were afraid to spend more than the limit that triggered the funds.

Just try to wrap your brain around that logic.  Can we now all agree that the Roberts court is dangerously stuffed with plutocratic wingdings?

In other irritating news, this Texas billionaire managed to even die at just the right moment, during the one-year lapse in inheritance taxes built into George W. Bush’s budget chicanery. Now his heirs will get a cool $9 billion tax-free (unlike, say, the income one earns through working). On top of that, it seems they’ll inherit some stuffed polar bears too:

On a somewhat lighter — though perhaps no less disturbing — note, the Stranger has an amazing cover story (NSFW!) about a strip club in Seattle called the Lusty Lady, which is closing down. It’s a long piece, but I’ll just say that the details get more eye-popping as you keep reading, and leave it at that. 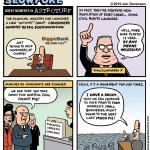 Got a chuckle out of this letter to the editor in my alumni magazine:

I was dismayed when I opened my copy of Virginia Magazine and found a short article celebrating the appearance of John Waters at the Virginia Film Festival (“Filthy Fun,” Spring 2010).

It is to my shame and regret that I admit to attending a late night showing of his Pink Flamingos in Wilson Hall in the spring of 1975. I remain haunted to this day not by the “fun” of attending the film, but by the fact that it was my first experience with true pornography.

The invitation by the U.Va. arts community to host Mr. Waters is a profound commentary on our social order today. Surely a host could have been found to help celebrate light, goodness and truth in the arts, rather than one who will lead minds and hearts into the descent into the shadows of the soul.

Shadows of the Soul, Exhibit A

Slowpoke has been named a finalist in the 2010 Association of Alternative Newsweeklies awards, to be announced in July. As it turns out, I know all of the other finalists — Matt Bors, Karl Stevens, and Steve Greenberg. Props all around. 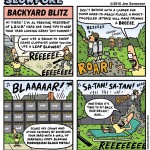 I hate leaf blowers. I think I might hate them even more than Hummers. At least Hummers don’t shriek with the wail of a thousand banshees. It always strikes me as deeply oxymoronic that people are fastidious about making their lawns look perfect, yet they give not one damn about the noise pollution that turns neighborhoods into deafening hells on earth. Not to mention the use of a stinking combustion engine to do light work at a time when it’s abundantly clear that that’s stupid. To quote the late actor Peter Graves, Mission: Impossible star and anti-leaf blower activist, “We are all victims of these machines.”

(And yes, I empathize with the low-wage yard workers who find them useful, but you gotta draw the line somewhere.)

Culturally-keen readers will recognize the title of the strip as reference to this song: