Ugh, what more can I say. This whole thing reminds me more and more of Naomi Klein’s Shock Doctrine every day. Manufacture a crisis, use the ensuing sense of panic to impose draconian cuts to programs people desperately need, and voila! Utopia at last. Never mind that Reagan raised the debt ceiling 18 times, and Dubya 7, or that Clinton balanced the budget, or that the vast bulk of our current deficit was formed under Bush. The hypocrisy is simply astounding.

The m&m’s in the first panel are, of course, a reference to Van Halen’s infamous contract rider stipulating that the brown ones be removed. David Lee Roth has explained that the point was not to be a prima donna, but to test to see if stage crews had read the contract carefully. I love this quote:

I came backstage. I found some brown M&M’s, I went into full Shakespearean ‘What is this before me?”… you know, with the skull in one hand… and promptly trashed the dressing room. Dumped the buffet, kicked a hole in the door, twelve thousand dollars’ worth of fun.”

I decided to make the m&m’s that Republicans object to the green ones, since, you know, they hate anything green. 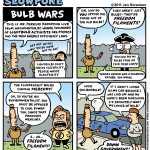 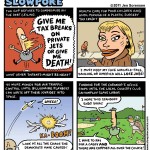 In the midst of all the hand-wringing over deficits, it seems no one is bringing up the simple fact that the deficit will disappear if Congress does NOTHING. The entire debate is a crock of simmering crap, a thinly-veiled excuse for Republicans who don’t give a damn about deficits to gut social programs. It’s straight out of the GOP playbook. Run up massive deficits to starve the beast (see: Reagan, Bush Jr.), then squawk bloody murder when a Democrat is in charge, pinning the blame on them and forcing the Dem to clean up the mess (see: Clinton, Obama, Mark Warner as governor of Virginia). And no matter how irresponsible the Republicans are, or how cautious Dems are budget-wise, the grand narrative never changes. Dems are always characterized as big spenders, Repubs as pillars of fiscal probity. And when Dems point to loopholes like the private jet tax break, the Republicans’ talking point is: “That’s small potatoes. It would hardly make a dent in the deficit.” Well, if it’s no big deal, then why threaten to blow up the whole economy over it? And if minor expenses don’t matter, why threaten to defund NPR over piddling chump change?  These people are unserious frauds concerned only with dismantling the New Deal, and the media should treat them as such. Anyone — and any cartoonist — who takes these self-proclaimed “deficit hawks” at face value (especially that smug, dead-eyed, know-nothing doucheswizzle Paul Ryan) is doing a gross disservice to the public and to democracy itself. 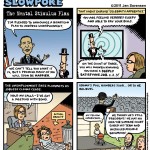 A few Obama supporters on Daily Kos took umbrage at this one. Personally, I think it’s a pretty mild warning about the dangers of not having a jobs plan. So what if it’s not politically feasible right now? He could at least try to make the case, instead of gratuitously invoking Republican falsehoods about the economy (see Krugman’s posts on this tendency here and here). It’s time to play offense at least rhetorically, Republican obstructionism be damned.