Why Can’t They Compromise? 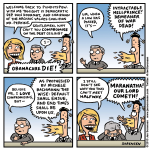 The bit about the End Times refers to Michele Bachmann’s remarkable statement last week that Obama’s arming of Syrian rebels was a sign that the Rapture is coming. Actual quote:

“Rather than seeing this as a negative, we need to rejoice, Maranatha Come Lord Jesus, His day is at hand,” Bachmann continued. “When we see up is down and right is called wrong, when this is happening, we were told this; these days would be as the days of Noah.”

Well, who WOULD worry about the U.S. defaulting on its debt in that case? A global financial meltdown doesn’t seem so bad if you think you’re going to be Hoovered out of it by a celestial vacuum cleaner.