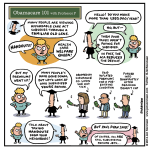 While I’ve received many encouraging comments on my recent comic for Kaiser Health News (“My Experience With Obamacare”), I’ve been struck by certain accusations that suggest widespread misinformation about how the Affordable Care Act actually works.

Clearly there’s a massive effort on the right to paint the ACA as a big, bad welfare program that’s transferring money from hardworking folks to undeserving scapegoats of some sort. Indeed, this seems to be the only lens through which many conservatives seem capable of looking at the world. (Not that I don’t support a strong social safety net.)

Here’s how the funding of ACA subsidies actually works: The cost is covered by a combination of cuts to Medicare overpayments to private insurers, cuts to the growth rate of Medicare reimbursement to hospitals, taxes on companies that stand to benefit from the ACA (such as medical device makers and insurance companies), and a tax increase on the top 2%. More info here and here.

So, unless your household is making approximately $250,000 a year, your tax dollars are not marked for the subsidy program. Note that federal income taxes for the rest of us have not gone up.

For the record, I pay a lot of money in taxes, from the federal income tax to the double payroll taxes faced by freelancers on their Schedule C income (both the employer and employee portion), sales taxes of 8.25%, and Austin’s very steep property taxes. I’m funding public schools even though I have no kids, which is something I don’t mind doing. I’m also funding plenty of things I don’t support – drone warfare being one example.

I do empathize with those people stuck with premium increases they can’t afford. This seems to be partly a function of the high cost of living in certain places — another complication from America’s soaring economic inequality. But I wonder how many of the people complaining about their premiums (and shaming those of us who qualified for tax credits) supported the public option when it was on the table. A single-payer system is a far more efficient way of providing insurance – it’s what I’ve always supported, and would prefer. As far as I’m concerned, there’s no need for private health insurance companies to exist at all; they are bureaucratic middlemen whose profitability runs contrary to the job they are supposed to do.

I have to admit, though, that I’m kind of enjoying the spluttering of wingnuts who pose as champions of entrepreneurship, risk-taking, and rugged individualism, as they tie themselves into knots opposing a law that frees people to pursue those very activities. Some of them are even trying to cast people like me as irresponsible, erroneously suggesting that those who get insurance through their employer are somehow subsidizing those of us who work for ourselves.

It’s more like the other way around. In addition to the double payroll taxes enjoyed by the self-employed, we don’t receive health care benefits tax-free the way employees of a company do. This is a subsidy for the traditionally employed. We can take a deduction for our premium payments, but the income we use to pay them is still subject to taxes. The ACA is a step toward making the individual market more like a company insurance pool.

Here’s a great article about other subsidies enjoyed by many critics of the ACA.

Yes, Obamacare is an imperfect solution to an enormous health crisis plaguing the richest nation in the world, but don’t blame the guy who actually tried to do something about it. Instead of hurling invectives at those of us who finally have some peace of mind after agonizing over health insurance for years, why not focus your ire on extreme price-gouging by hospitals — $137 for a $1.00 IV drip bag, anyone?

In short, if you’re not making over $250,000 and you’re spewing this “I’m subsidizing you” nonsense, kindly put a sock in it. If your premiums went up, I’m sorry — but others were subsidizing them before, sometimes with their lives. If you are making over $250,000, you should support a program that makes America a fairer and better country. It’s a clear step in the right direction, if not the perfect solution.