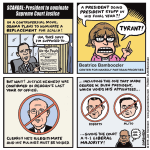 If Scalia had died during the final year of the George W. Bush administration, can you imagine the GOP making the absurd claim that a successor must not be named in an election year? There is no debate to be had here. It’s Obama’s turn.

May this be the beginning of the end of a retrograde Supreme Court that has been so destructive to our democracy and civil rights, a court more interested in protecting the lives of coal companies than those of Earth’s seven billion human beings. Time for a new era.