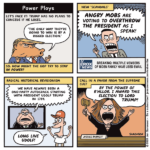 Well, there goes the Supreme Court. I can’t tell you how many conversations I’ve had and cartoons I’ve drawn warning about this moment, only to feel like people just didn’t care. With Barrett on the court, we’ve entered new, uncharted territory. Basic legal assumptions are about to be eviscerated, and no one will be safe.

On a related note, this Guardian article points out that the contemporary Republican party now resembles authoritarian governments of Turkey and Hungary. 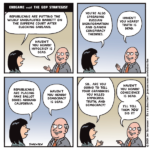 As you may have heard, the Court was split 4-4 yesterday in a ruling that allowed Pennsylvania to count ballots that arrive up to three days after election day, as the state Supreme Court had ruled. This was, apparently, a Constitutional no-brainer that should have been 8-0 in favor of democracy, but four right-wing justices took a radical turn. With Barrett on the court, these election rulings will almost certainly favor Republicans.

This LA Times editorial has more on the fake ballot boxes in California. 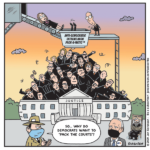 Suddenly much of traditional media seems preoccupied with the idea that Democrats might consider “packing” the Supreme Court. This particular phrasing is ahistorical and completely misleading. It ignores the years of scorched-earth Republican obstruction to Obama’s judicial nominees, including the refusal to give Merrick Garland a hearing, followed by unbridled court-packing under the Trump administration, in which the judiciary has been stuffed with unqualified cronies and Federalist Society nutjobs.

What’s on the Ballot? 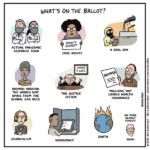 I have always thought it idiotic how we talk about presidential elections in terms of individual personalities. Presidential elections are first and foremost about social networks — countless appointees to courts and regulatory agencies. Most importantly, this one is about the defeat of authoritarianism — the only way we will ever have a more progressive future, or any future at all.