Speaking of where I’m appearing in print these days, there’s a Slowpoke cartoon in this week’s Stranger (Seattle), and I hear Slowpoke is running in the Village Voice again. If you live in either of those cities, pick up a paper and support good ol’ fashioned print journalism.

I have an essay in the current issue of Whitefish Review, a cool literary journal out of Montana that focuses on life in the Rockies. 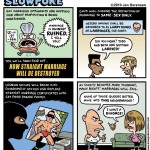 I really do seem cursed when it comes to internet access. Having some problems getting broadband in the middle of Seattle, one of the tech capitals of the world. So this space will continue to be quiet for a little while.

This Week’s Cartoon: “Why We Still Need the Bush Tax Cuts”

If there was ever any indication that the Republican party does not represent a  political philosophy, but sheer self-interest of the moneyed class, it is their insistence on keeping the Bush tax cuts at the same time that they howl about deficits. They tried to shut down unemployment benefits for desperate workers, and filibustered a bill to help small businesses. They speak plaintively about “burdening our children.” But hey, if you’re still makin’ mad Benjamins, nothing compares 2 U. Have some more!

The art in the second panel was inspired by an illustration I did many years ago. You can see the original here.