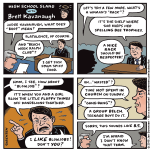 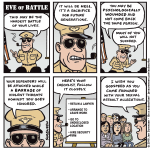 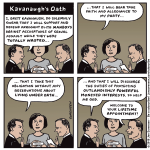 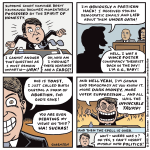 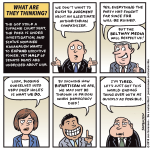 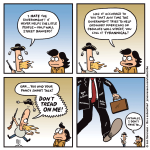 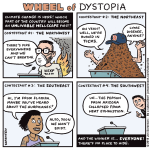 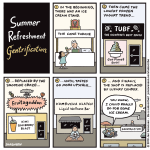 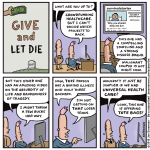 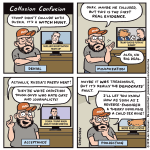 Pretty straightforward one this week. This child sex ring thing keeps coming up in Alex Jones’s conspiracy theories, with him accusing Mueller of being a pedophile recently.

In other news, I wrote and created artwork for a Nib animation that was published the other day — you can see it here (mine starts at the 0:57 mark). FOLLOW THE CRUMBS, MUFFINHEADS! 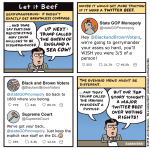 Americans are gluttons for news stories about smackdowns, insults, and personal rivalries. Someone says something outrageous on Twitter? We’re all over it. As for slightly more abstract issues like gerrymandering, we just don’t get as worked up. Some of us do, to be sure. But if gerrymandering could be translated into a simple verbal insult, it might resonate with more people. In this cartoon, I’m of course referring to the recent Supreme Court decision that allowed Texas’s discriminatory redrawing of Congressional maps.

Did you know that sea cows once existed? Now extinct, the Steller’s Sea Cow roamed the Bering Sea before humans hunted it into oblivion. Unfortunately, the sea cow did not resemble an actual cow.

Pros and Cons of the New Supreme Court 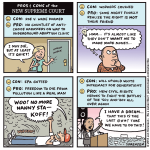 While I applaud the efforts to block Kavanaugh from joining the Court, I can’t help but feel that particular pooch was screwed a long time ago. To mix metaphors horribly: the ship of judicial extremism has sailed, the horse of market fundamentalism has left the barn. There isn’t even a barn anymore — it’s now a big box store.

I keep thinking of this dude I met when I was in Wisconsin in September of 2016. He was determined to vote for Jill Stein to “send a message.” I pleaded with him for half an hour, citing the Supreme Court over and over, but in the end he seemed unconvinced. Roe was a stake, and nobody seemed to care.

If you want to feel alarmed, read this Daily Kos diary about Kavanaugh and the environment, and this NYT column about the Court’s evisceration of voting rights. This ThinkProgress post about voting rights is also good.