I was going to be interviewed by the AP today about my response to the Supreme Court ruling, thanks to the health insurance comic I drew for Kaiser Health News. After preparing some remarks, I was told that the article was running long and they didn’t need further commentary. So, in an effort to make ye olde proverbial lemonade, I’ll share my thoughts here.

Like most people, I was stunned by the ruling.  I never thought I’d say this, but it’s possible that John Roberts just saved me a shit-ton of money. Believe me, I have no love for private insurance companies, but the mandate is a positive step forward as we work toward single-payer.

At the same time, I don’t particularly feel a sense of relief. I’m dreading the ongoing political battles that lie ahead, and wish this could just be over. The mandate will be framed as a burdensome tax, and ACA supporters need to make very clear that it’s a cost-control measure that ultimately benefits us all. It’s a way of improving a grossly inefficient system. (Also, people: please stop using the stupid term “Obamacare.” Have we not learned anything about framing in all these years?)

Another reason I feel uneasy is that the SCOTUS decision was a frighteningly close shave — the other four justices would have struck down the act in its entirely! That’s radicalism in your face, and it’s something we’ll have to contend with for a generation or more. But for today, I’ll let myself celebrate.

This Week’s Cartoon: Masters of the Universe-ity

As a University of Virginia alum, I’ve been following the recent drama surrounding the ouster of President Teresa Sullivan very closely. Yesterday, Sullivan was reinstated by the Board of Visitors, to the great relief of just about everyone in the university community. It’s been heartening to watch the rallies and see good old-fashioned activism (aided by new-fashioned social media) clearly rewarded.

While this particular battle may have been won, the corporatization of higher education remains a problem. More than anything, this situation has revealed the dangers of the awesome hubris that can develop among certain wealthy individuals in positions of power. The handful of people behind Sullivan’s ouster included a couple billionaire hedge fund managers and a condo developer from Virginia Beach with a soft spot for the musings of David Brooks. Such experience does not qualify one to make sweeping decisions in secrecy about a major public university. Here’s a suggestion for those who think their success in extracting wealth from the marketplace means they’re brilliant Renaissance People capable of running anything: take a few of those millions and buy some humility. Please.

For more on the subject, I recommend this Prospect article by another U.Va grad. 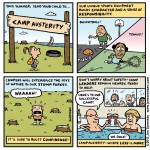 I have my hands full with moving-related activities, so I’m afraid additional cartoon commentary will be austere today.

This Week’s Cartoon: The Circle of Stupidity, Scott Walker Edition

As the daughter of public schoolteachers, I can no longer stand to even look at Scott Walker’s guppy face. I’m sorry he’s still around.

You would think at some point, conservatives would wake up to the fact that workers can’t buy stuff without money. I mean, you can’t keep stomping the crap out of the middle class and expect awesome economic growth. That’s magical thinking — a phenomenon not uncommon among Republicans, granted.

While I was wondering around the Rhode Island Convention Center in a daze this past weekend, the 2012 Altweekly Awards were announced… and apparently I won first place this year. Totes awse!

I think my website FTP problem has been resolved, knock on mousepad.

I just returned from Netroots Nation, where I was on a panel with Tom Tomorrow and Matt Bors. For a great photo of all three of us in the costume shop of Big Nazo, see the This Modern World blog. 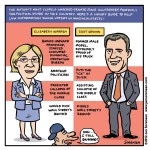 I have not had a chance to fix the stupid FTP problem with my site yet, so I’m going to link to this week’s cartoon over on Daily Kos.

I’m posting from Providence, RI, where I arrived last night for Netroots Nation. I’ll be on a panel Saturday morning with Tom Tomorrow and Matt Bors, sharing our cartoons and taking Q&A. More details here.

I know, I haven’t updated the site lately. My host did a massive upgrade recently, which always seems to happen while I’m traveling, and it seems my FTP login was reset. I’ll sort it out soon. In the meantime, I have to prepare to fly to Rhode Island tomorrow for Netroots Nation!