« Beyond the Paleo
Assault on Reason » 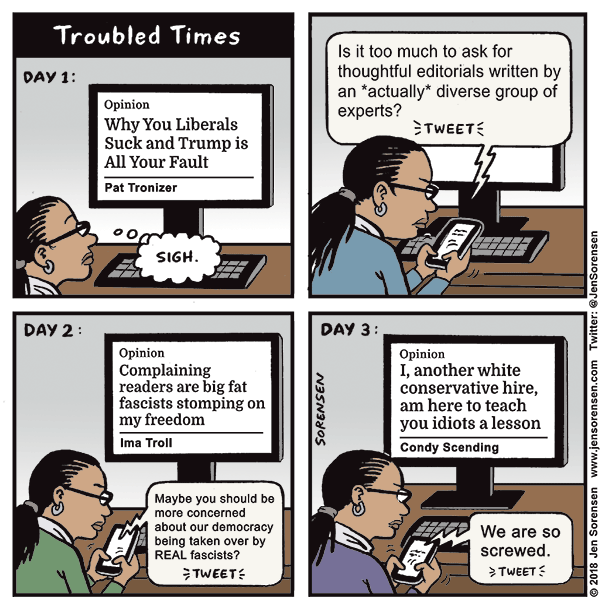 As a longtime loyal New York Times reader, it saddens me to have to critique the paper like this. The Times has always been a mixed bag, but some of their investigative reporting is very good. And really, the country needs a fully functioning New York Times — so we should all be trying to make it better, not destroy it.

That said, they have recently gone down a rabbit hole on their editorial pages. In their hiring decisions and topical obsessions, they have doubled down on a misguided attempt to not appear to have “liberal bias.” For example, they (or whoever specifically makes these decisions) have apparently bought into the hyperbolic, highly-distorting, and relentless Fox News obsession with a small number of overzealous college students as an attempt to smear all progressives. Fox’s game is straight from an authoritarian playbook, attacking academia and academics as the “real threat” to a free society, even as we are in the middle of an actual attempted fascist takeover of the country. (Meanwhile, Trump cozies up to people like Erdogan of Turkey, who literally throw academics in prison and fill populations with a sense of victimization at the hands of intellectuals, teachers, etc.) It’s worth noting that the Times actually hired as an editorial page editor a woman who, as a college student, was known for attacking professors who criticize Israeli state policies toward Palestinians.

Indeed, the Times’ self-righteous condescension towards, and stereotyping of, its own readership seems an awful lot like the attitude it chides “liberals” for displaying towards Trump voters — those saintly, salt-of-the-earth people who are definitely not racist (perish the thought!), and are above reproach.

Here are some suggestions for columnists they could have picked if they valued actual diversity of perspectives, and elevating underheard voices instead of dominant ones:

The country desperately needs the Times to rise to the occasion and help good people preserve democracy in America. Some readers have canceled their subscriptions, and this may or may not be an effective form of protest. I’m not sure about the best tactics here, but I hope the Times sees the light soon.