Continuing with a long series of obnoxious happenings in matters repro, South Dakota has passed a law that pretty much forces women to seek “advice” from those faith-based  “Crisis Pregnancy Centers” that I blogged about a few weeks ago. These centers are, as you might expect, notoriously unscientific. Poor South Dakotans. This is the second time I’ve had to make fun of them for this sort of thing. In all fairness, I will say the Badlands are lovely, and I spent a fine evening in Rapid City a couple years ago.  South Dakota is also the home of the Corn Palace and a giant pink prairie dog (see below).

I debated whether or not to call this strip “Conservative Counseling”  because I have misgivings about the term “conservative.” It implies the opposite of radicalism,  yet a number of self-described “conservative” pundits have policy prescriptions that are, to put it gently, nothing short of dramatic. But in the end, the alliterative “c’s” had it.

[Afterthought: for a fascinating map of passport ownership that ties into the fourth panel of the cartoon, see this post by Krugman.]

I wrote a review of Sarah Glidden’s How to Understand Israel in 60 Days or Less for Cartoon Movement. 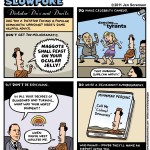 A reader is upset about my Unplanned Parenthood cartoon:

Hi Jen, this is in response to your recent depiction of Planned Parenthood. First of all, I am not irrationally upset, please do not delete this message upon noting that it is a complaint. My lady associate and I found the particular section “Sexual Assault Victim” to be offensive and particularly insensitive. You have obviously never been raped, though many readers of Santa Cruz Weekly have been. You probably ruined someone’s day. Play nice, bitch.

Now, the second panel of that cartoon obviously criticizes the viewpoint of the Unplanned Parenthood counselor, who suggests the sexual assault victim was “probably showing a little thigh.” It illustrates the horror and absurdity of being told such a thing. This reader seems to think I’m attacking Planned Parenthood itself. But it says right underneath the title, “Pregnancy Centers, GOP style!” For some people, I suppose cartoon interpretation is a bitch.

As the daughter of teachers, I find myself more incensed by what’s happening in Wisconsin than I’ve been about anything in a while — and there’s been plenty to get upset about. Last week’s coldhearted maneuver by the Wisconsin GOP was bad enough, and then that vapid, braying dipstick Sarah Palin — the opposite of education personified — went on TV (wearing a jacket from the set of “Star Trek,” I might add) and called the teachers’ union leaders “thugs” after the Wisconsin Republicans received a death threat:

“Well, these union bosses that are acting like thugs, as they are leading some of their good union members down a road that will ultimately result in, unfortunately, somebody getting hurt,” Palin said… ” it is these unions bosses’ responsibility to turn down the rhetoric and start getting truth out there, so that nobody gets hurt.”

Good one, Ms. Blood Libel! Of course, Palin is hardly the first to try to smear the WI protesters as “thuggish” despite amazingly peaceful demonstrations, so it seemed appropriate to draw a cartoon reminding everyone that these are the people who taught you to write the alphabet. They are not thugs, unless boring you to death with quadratic equations counts as thuggery.

Adding further insult to injury, Gov. Scott Walker actually had the gall to spin union-busting as “progressive” and “innovative.” Um, no. 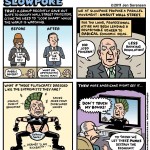 If you enjoyed my Oregonian story about the snow ghosts in Whitefish, Montana, you might want to check out these totally cool photos of the Japanese equivalent — snow monsters!

(To give credit where credit is due, the above photo was originally posted here, prior to the snow monsters page linked above.)

Thanks to reader John A. for the link. 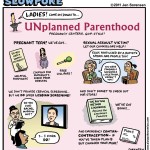 As unions grow less and less powerful in the US, it seems we’re losing our collective memory of why they are important, and also of what a decent job looks like. As one young person put it recently in the NYT:

More typical was Brett Stephens, 23, who had worked in more jobs since he was 15 than Ms. Rollins has in her lifetime. He had jobs at a snack shop, as a lifeguard, at Little Caesars restaurants in South Carolina and Florida, at a Limited clothing store, with a temp agency, and most recently as a cook in a diner.

He did not go to college, he said, because his grandmother, who raised him after his mother died when he was 9, could not afford to send him. Now he scrapes by on $10 an hour, unable to afford health care for his two children. It is covered by welfare.

“I think they should stop crying,” he said of the protesting union members. Everyone was working hard and tightening their belts, he said, so why should unions be different?

I empathize with anyone trying to support a family on crap jobs like that — but this also illustrates how the working class plays right into the hands of the very elites who want to do away with unions. First, eliminate the good jobs that allow workers their fair share of the nation’s wealth; next watch them turn against each other. On the Slowpoke Facebook page (only 5 more likes till 900!), one reader alludes to a crab bucket, an analogy often used by writer Terry Pratchett:

Anyone as experienced in handling seafood as Ms Pushpram knows that no lid is necessary on a bucket of crabs. If one tries to climb out, the others will pull it back. Crabs fall considerably lower on the evolutionary scale than primates and, certainly, people, so this this seems to be a basic force of life. Petty jealousy or a reluctance to see anyone do better has probably slowed the development of civilisation more than anything.

Fortunately, polls show a majority of Americans support workers keeping their bargaining rights — so our case of crabs is not an epidemic, as some billionaires might have you believe.