I want to let regular readers know that there will be some changes around here,  concerning both my website and my real life (I’m moving again). This means I’ll probably post extra-minimally on the blog for a while. So gird your loins, or do whatever it is you need to do to Be Prepared.*

*Actually, there is nothing you need to do. 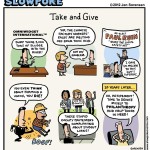 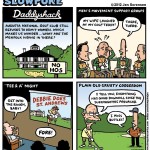 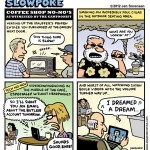 A non-political cartoon this week, as I’ve been busy traveling and trying not to think about politics. All of these offenses except the cigar-smoker were observed recently. Personally, I cannot imagine extending my personal Sphere of Entertainment (or Sphere of Commerce) to those sitting around me in a public space, but hey, that’s just me. Skype makes loud cellphone talkers seem almost quaint, doesn’t it?

Coffee shop proprietors: feel free to print this one out and hang it on the wall. Use the larger click-through version. I’ll be grateful.