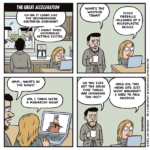 I’ve long been a fan of the film Koyaanisqatsi: Life Out of Balance. It has always seemed obvious to me that the ever-increasing speed of late industrialization was both pointless and harmful to life on the planet. In recent decades, we have seen most productivity gains go to the very top; inequality has spiked, the climate crisis is exploding, and democracy is wilting under a rapid-fire glut of disinformation. Change is inevitable, but this degree of disruption and instability is simply inhuman. 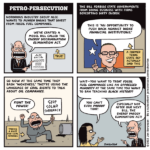 As many readers here probably already know, the American Legislative Exchange Council is a Koch-backed group that pairs corporate lobbyists with right-wing lawmakers to generate model bills that are pretty much industry wish lists. The Energy Discrimination Elimination Act would require that states maintain a blacklist of financial firms that have divested from fossil fuels, and deny any government contracts to those companies. This anti-divestment campaign is already the law in Texas. 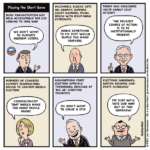