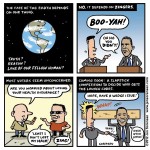 The political cartooning community was shaken today by news of Syrian cartoonist Ali Ferzat’s beating by pro-Assad thugs. They broke his hands to stop him from drawing cartoons critical of the President.

This horrifying incident reminds me of an exchange I had earlier this summer when meeting with political cartoonists from the Middle East and North Africa through a State Department program. Naturally, a prominent topic of discussion was the freedom of speech we American cartoonists enjoy. I was on crutches thanks to a skiing accident (I’m mobile now, thank you), and I made a dumb joke, obviously tongue-in-cheek, about how the Obama administration didn’t like one of the cartoons I drew. “Ah, so you are like an Arab cartoonist!” one of the visitors joked back. The whole room laughed, maybe a little too hard. Gotta admire the bravery of the Ali Ferzats of the world.

There’s this persistent idea that government spending is akin to decadent and frivolous consumer spending. People speak of “greedy government bureaucrats” lusting after tax dollars as though they were hedonists seeking their next shopper’s high. As though the mundane work of keeping the streetlights on or preventing sewage treatment tanks from overflowing was like buying a Roomba.

I’m not saying there’s no government waste. The fact that Medicare can’t negotiate with pharmaceutical companies over the price of drugs is a big stupid waste of taxpayer money. So is outsourcing the work of the U.S. military to highly-paid mercenaries. And yet we don’t hear the self-proclaimed deficit hawks screeching about these hardworking-taxpayer-dollar-suckers. Somebody’s buying expensive toys, all right.

This Week’s Cartoon: “The Octangulator” 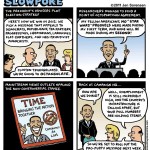 I didn’t really want to do another cartoon about Obama since I’ve done several lately, but I read a couple things recently that induced much brow-furrowing and teeth-clenching. One was this post by Robert Reich about what he’s heard from White House insiders:

So rather than fight for a bold jobs plan, the White House has apparently decided it’s politically wiser to continue fighting about the deficit. The idea is to keep the public focused on the deficit drama – to convince them their current economic woes have something to do with it, decry Washington’s paralysis over fixing it, and then claim victory over whatever outcome emerges from the process recently negotiated to fix it. They hope all this will distract the public’s attention from the President’s failure to do anything about continuing high unemployment and economic anemia.

Then there was this NYT article:

A Democratic Congressional adviser, granted anonymity to discuss party deliberations, said: “We’re at a loss to figure out a way to articulate the argument [for economic stimulus] in a way that doesn’t get us pegged as tax-and-spenders.”

Everyone knows that Democrats can balance budgets until the end of time and still get tagged as tax-and-spenders. So this strategist’s solution is to stand like an unblinking cow in the middle of the train tracks and do nothing? For this, he or she actually gets paid?

I tend to catch some flak when I’m critical of Obama, and this week will probably be no exception. I often feel trapped between defenders of bad policy and poor strategy from the Dems, and those who seem to have unrealistic expectations without taking context into account. And by “context,” I mean that the cheese has fallen off the nation’s collective cracker. But we have to try to change that context instead of echoing it, as Obama has done far too much.

While the nation was distracted with debt ceiling shenanigans, House Republicans did something else that went largely and predictably ignored by much of the news media. They quietly slipped 39 anti-environmental riders, many of them eye-poppingly radical, into an appropriations bill. The riders would do things like: prevent the EPA from regulating greenhouse gases for one year, stop coal ash from being treated as hazardous waste, and block the enforcement of new fuel efficiency laws that automakers have actually agreed to. The money quote from Rep. Mike Simpson (R-ID): “Many of us think that the overregulation from E.P.A. is at the heart of our stalled economy.” Oh yeah, that’s it. Fortunately, many of these brilliant ideas won’t make it through the Senate, but you never know, now that we live in a hostage-ocracy.

As I first read about this, it occurred to me that Republicans tend to view environmental protections themselves as a form of pollution. If the GOP fought actual pollution with the same vigor they display in fighting pollution laws, America would be clean enough to lick. Don’t think about that too hard.

Oh, and on a somewhat-related note: it takes a lot to get me to LOL, but this item on TPM did it. Tea Partiers have swallowed a Glenn Beck-promoted conspiracy theory that the UN is going to take away their farms through a sustainability program called “Agenda 21.” To quote Beck:

Some people now have begun questioning and standing up to what, on the surface, seems like a harmless initiative just to save the environment. But it is not… once they put their fangs into our communities, they’ll suck all the blood out of it, and we will not be able to survive. Watch out. 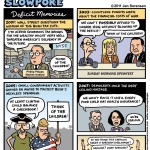