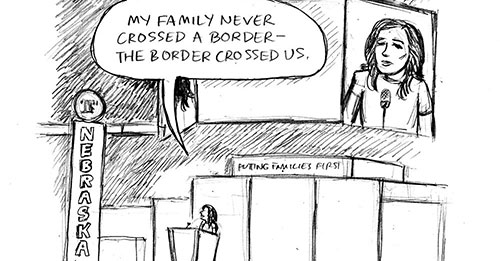 I’m in Philly for the DNC, so I’ll have to keep this brief. I’m feeling increasingly frustrated by the skewed sense of perspective many Americans seem to have about the dangers we face. Not that recent violence around the world isn’t cause for concern, of course. But Trump’s immigrant-bashing was vile, racist, and truly dangerous. 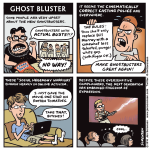 The backlash goes all the way to the top: even Donald Trump has weighed in with exactly the sentiments you would imagine. Like the director and cast members, I can’t believe we’re even still having this “conversation.”

I haven’t seen the movie yet, but I hear it’s pretty good. 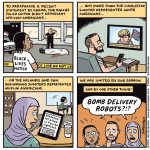 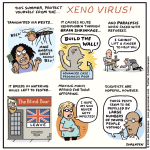 I realize that technically this should be the Xenophobia virus, but had to shorten it to Xeno for the joke to work. After writing this strip, I googled “Xeno virus” and found that it is a song by the California death metal band Deeds of Flesh. So, apologies to them.