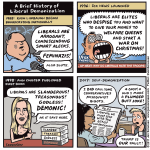 Democracy is not partisan 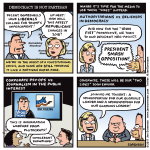 What would it take for the GOP to dump Trump? 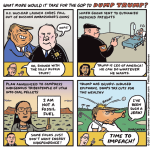 To illustrate just how absurd things have gotten, I actually had the first panel of this cartoon drawn before news broke that Trump leaked classified intel to the Russians in the Oval Office. That was supposed to be parody! Okay, maybe the launch codes haven’t fallen from Sergey Kislyak’s jowls yet… but it’s only a matter of time.

At this point, Republicans have demonstrated such a breathtaking dereliction of duty, it’s clear they have completely ceased to be a legitimate political party serving the public interest. They represent only the abuse of power, and are fully complicit in this ghastly nightmare.
Tweet
05.16.2017 | Posted in Weekly Cartoon
1 Comment

Freedom to be Screwed, 2017 edition 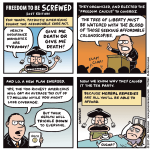 The AHCA is so monstrously cruel any honest description sounds hyperbolic. Not only will it literally kill people, but it’ll kill entrepreneurship too, as workers stay locked in their jobs for fear of losing heath insurance. Self-employed people with pre-existing conditions are hosed. I face the possibility of not having health insurance for the first time in my life. My friend, a cancer survivor, was interviewed on the local news about the prospect of facing unaffordable premiums. So much wonderful freedom! Thank you, House Republicans. 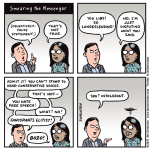 Seems like a lot of otherwise clear-thinking people are falling for the Fox News claptrap about liberals not being “open-minded” enough. This is how you wind up with another white conservative dude being chosen as a diversity hire for the extremely not-diverse NYT op-ed page. Yes, we live in politically-polarized times, and everyone is angry, and sometimes protesters go overboard (neo-Nazis do have a way of bringing out that response in people). But to dismiss progressives as “elitists,” “PC,” and so on, is just trading in insults. It isn’t engaging in honest, thoughtful debate — it’s just trolling.