US to Boko Haram rape victims: You WILL have the terror spawn!

From the Global Justice Center:

Hundreds of women and girls have been forcibly impregnated by Boko Haram. Unofficially, 214 of the recently rescued girls have been reported pregnant after facing horrific circumstances of sexual slavery and violence. Organizations like the UNFPA are working as best they can to provide for the women, with a spokesperson saying, “We look after them and ensure they get antenatal care and that they deliver properly and that they even get cesarean section when necessary.”  While UNFPA are doing good work helping these pregnant women and girls, they are hamstrung, by a decades old US policy, from providing the full range of medical services these women and girls require.

Yes, thanks to the late Senator Jesse Helms, and the persistence of this deadly, utterly retrograde foreign aid policy, these survivors of war may have to bear their rapists’ children. Not that it’s being discussed much in American media.

One fine day at The Great Hall of Iraq Whoppers 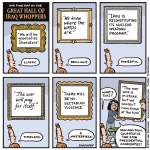 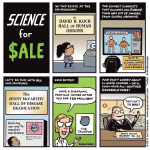 It was hard to fit all the relevant details into this cartoon, so I suggest reading this ThinkProgress article for background on the questionable Smithsonian exhibit, which reportedly presents a far too cheerful and uncomplicated view of the challenges posed to humanity by climate change.

An interactive game in the Koch Hall actually asks visitors to design a future human body adapted to “really hot” temperatures. “How do you think your body will evolve?” it asks. “Will you have a tall, narrow body like a giraffe? Or more sweat glands? Touch to choose the one you want.” This phrasing seems to imply that your own body is capable of magically transforming itself into a sweaty giraffe-person. This puts an awfully nice spin on the “death” part of natural selection. Moreover, dramatic temperature changes are predicted well before we’d be seeing those extra glands dominating the gene pool. 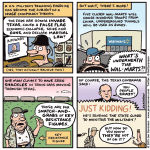 For more info on the “Jade Helm 15” set of conspiracy theories, this TPM article offers a nice rundown. Fears are so widespread that Wal-Mart literally just issued a statement denying involvement in a U.S. military invasion of Texas.

To think we could have had Wendy Davis as Governor instead of Greg Abbott… it is to weep.