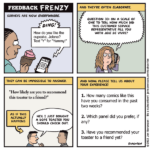 It’s not just that every business transaction seems to come with some sort of feedback request, which is mildly annoying in itself. But the surveys themselves tend to be time hogs, as though we are all retired people with nothing to do all day but provide free market research. (Not that retired people necessarily want to answer four-page questionnaires, either.) I would like to be paid for my careful, extensive analysis of products or services, thank you very much! 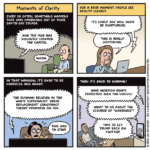 Over and over again, we have these events that show very clearly what is happening in this country — a violent white supremacist movement spreading like wildfire, and fueled by deep-pocketed players — only to slip back into the daydream where “both sides” are to blame, and endless handwringing ensues over the behavior of good people trying to stop the madness.

We’re finally paying the price of the scorched-earth obstructionist game the GOP has been playing with SCOTUS (as well as the federal courts), and getting away with over and over again. I mean, they haven’t respected institutions at all — destroying democratic institutions from within is what they do. Clarence Thomas’s wife literally supported a coup to overturn the last election!  The only solution at this point would be adding people to the court, but it does not look like Dems will get the numbers to do this and it is doubtful they would even have the courage to do it, as they would face waves of mainstream pundits saying (falsely) that Dems are the ones undermining the institution.

What Does the Billionaire Think? 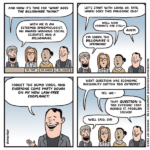 Recently, when Elon Musk was asked about the possible unfairness of the world’s billionaires controlling so much of the world’s wealth, he suggested that there were “axiomatic flaws” leading people to that conclusion. He claimed that he did not spend money like a billionaire, with the exception of his time-saving private jet, and that he did not even own a home. I think I detect an axiomatic flaw in that answer.

Support these comics by joining the Sorensen Subscription Service!