Conservative commentator George Will made news over the weekend with his announcement that he was leaving the Republican party over Donald Trump. The last straw, it seems, was Trump’s statement that a judge of Mexican descent could not be trusted to preside over the Trump University lawsuit impartially. You might get the sense that Will is deeply troubled by racism, until you start looking at stuff he’s written over the years.

Here’s further context for the quotes and paraphrased statements in the cartoon.

What exactly was objectionable about citing Horton and his rape victim as a consequence of that prisoner-release program?

(A common refrain on the right is that Al Gore introduced Horton during a 1988 debate with Dukakis, which is debunked here; Gore only brought up the furlough program.)

A candidate can succeed in giving an aggrieved minority a voice—e.g., George Wallace, speaking for people furious about the ’60s tumults.

3. Hurricane Katrina — From September, 2005 column “A Poverty of Thought”:

America’s always fast-flowing river of race-obsessing has overflowed its banks, and last Sunday on ABC’s “This Week,” Sen. Barack Obama, Illinois’s freshman Democrat, applied to the expression of old banalities a fluency that would be beguiling were it without content. Unfortunately, it included the requisite lament about the president’s inadequate “empathy” and an amazing criticism of the government’s “historic indifference” and its “passive indifference” that “is as bad as active malice.”

That flooding metaphor sure was tactful three weeks after the devastation of New Orleans. Will proceeded to lecture the locals on out-of-wedlock births.

4. More on Will and voter ID here. 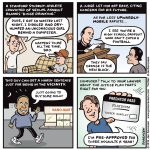 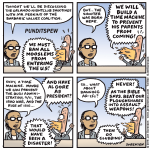 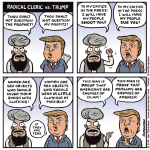 Given Trump’s penchant for threatening the press, encouraging violence among his followers, and directing hate towards minority groups, he sometimes seems like a mirror image of the very extremists he claims he’d protect us from. Actually, more than anyone, Trump reminds me of Turkey’s authoritarian president Erdogan, who has pursued a harsh crackdown against his critics in the media in recent years, while enjoying support from the nationalism-and-traditional-values crowd.

In case you were wondering, there was no new strip last week because I was in Memphis for the National Cartoonists Society convention.