I’ve been meaning to write about my friend and colleague Lloyd Dangle ending his altweekly strip Troubletown. Troubletown has been one of my favorite cartoons over the years, and this was its last week. I can attest to the fact that he’s a nice guy, too. We did a cartoon reading together once in Berkeley, and he totally saved my butt by borrowing a digital projector from a friend so I could show my Powerpoint slides. (Lloyd always used an old-fashioned slide carousel to avoid such predicaments.) He also let me stay in his son’s room at his house and cooked me a great dinner. Not only can he draw, but the man knows how to prepare an artichoke! We at Casa Slowpoke raise our drinking glasses high. 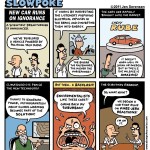 Matt’s latest cartoon has moved me to share a comic I drew seven years ago, the last time we went through a Donald Trump-oriented media frenzy (click for larger version).

I sometimes watch late-night comedy shows while drawing the strip. One night recently, THREE shows in a row had interviews with Donald Trump or a sketch about Trump. When the networks want to ram something inane down our throats, they sure don’t hold back. No wonder a majority of Americans still think Iraq had something to do with 9-11, even though the White House once quietly admitted this was false (it was barely covered).

So, you see, this happens once every seven years. He’s like a PLAGUE OF LOCUSTS! 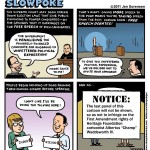 I’m going to be wandering around the con this afternoon and tomorrow afternoon, and will be appearing on a panel Sunday at noon about the possibility of starting a NW chapter of the National Cartoonists Society. If you happen to be there, you are invited to bump into me as I drift about and say hello.

This Week’s Cartoon: “Obama Cuts Deal to Live in Tent” 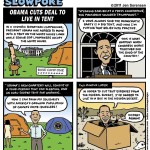 I’ve probably gone a little easier on Obama than some of my peers — not so much because I think he’s doing a great job, but because I have a certain amount of empathy (possibly too much) for anyone trying to run a country this steeped in nutballery.  The real problems with American politics are systemic. But even with my very low expectations, I’m kind of  amazed by Obama’s caution-to-the-point-of-recklessness. The contrast between Obama the campaigner and Obama the cold-fish prez have grown so stark, he’s looking highly disingenuous — and in politics, that’s a big risk. You’d think someone so risk-averse might start to worry about that.

This Week’s Cartoon: “Old McDonald’s Had a Farm” 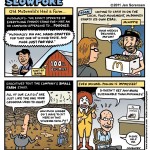 Blogging this one a bit late, as it’s been a busy week. I had a big freelance deadline, spazzed my lower back out, and hosted my sister-in-law and her husband while waddling about like a duck. But better late than never, right?

I originally intended to draw a cartoon about that douchetastic governor of Maine who wanted to remove a mural depicting the history of labor from the Department of Labor. But while checking Daily Show clips to see if they’d done my idea (they had, dammit), I came across this utterly ridiculous McDonald’s ad touting the artisanal nature of Big Macs. It’s only 17 seconds — check it out!

I just love the perky smile on the McDonald’s employee’s face as she pours her heart and soul into that Big Mac. Notice those chic, Asian-style bowls she’s grabbing the pickles and lettuce from. Why do I get the feeling those are not standard-issue at all McDonald’s? And then there’s the barn. Why, all Big Macs start out in cute little red barns, don’tcha know!  Heck, why go to your local farmer’s market at all when you can get hand-crafted, 100% beef burgers, lovingly made just for you by a chipper woman in a cute ponytail?

On a related note, my friend Anne pointed me to this article, in which a photographer compares advertised images of fast food with what you actually get.

[UPDATE: Here’s a video on how burgers are prepped to look perfect in ads — fascinating!]