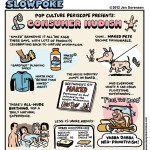 I decided to take a week off from the Republican primaries and other assorted nonsense in order to address the pressing matter of “five-fingered” footwear. The other naked-themed items leapt out at me around the same time. I don’t have a problem with minimalist shoes or other back-to-basics products, but I do find them curious cultural artifacts. Simplicity has major authenticity in this cluttered world. (Somewhat-related strip here.)

While researching this strip, I learned that Naked juices are owned by PepsiCo and Odwalla by Coca-Cola. It’s like a high-end fruit drink proxy war! 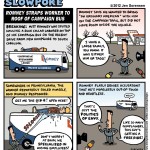 Most people seemed to appreciate this week’s cartoon, but I’ve noticed a couple comments elsewhere suggesting that I’ve been dishonest with my statement that more whites than blacks receive food stamps. These critics assert that because America’s white population is significantly larger, a higher percentage of blacks receive nutrition assistance, and I’m a big fat liar for not presenting things this way. To which I say: these nitwits are totally missing the point.

It’s no secret that poverty runs high among African-Americans due to a variety of historical factors, and I’m not trying to cover that up. Nor am I trying to pit racial demographics against one another. I’m simply pointing out that when you hear Republicans talking about people on food stamps, they tend to explicitly (or sometimes implicitly) refer to blacks, despite the fact that 5.15 million white households receive food stamps vs. 3.2 million African-American, as of 2009. The fact is, poverty is pretty diverse, and no one group should be singled out as “the food stamp people.” 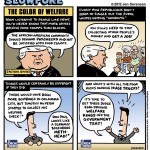 Har! Just a fun-lovin’, booty-stealin’ marauder! I’m sure these guys would get a real kick out of it:

Above video via a Plum Line post about a conservative laid-off mill worker who says Romney (and Bain Capital) destroyed his life. 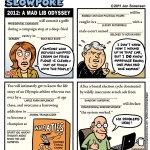