This Week’s Cartoon: “A Teachable Moment” 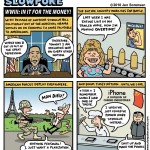 Note: This post has been revised from the original in an effort to clarify facts about the Wisconsin budget.

If there’s one thing to understand about the Wisconsin battle, it’s that it’s not really about the budget, but a premeditated and politically-motivated attack on the teachers’ union. The teachers have already ceded to pay cuts — but now Walker is going to start firing them one by one if they don’t give up their bargaining rights forever. Never mind the fact that the Wisconsin budget was left with only a modest shortfall by Walker’s Democratic predecessor. To top it all off, Walker has added an additional $140 million projected shortfall to the next budget with his wealthy donor-friendly tax cuts.

After a commenter pointed out to me that Walker’s budget-busting measures were, according to Politifact,  not part of the current shortfall, it occurred to me that the first panel of the cartoon is misleading.  While I’d probably write it differently now, I still think the larger point — that he purports to care about the deficit while adding to it — is legit. And even if the current modest shortfall is not due to Walker, it’s clear that the Republicans are using the economic downturn to accomplish their long-sought political goals (union busting) even as they add to deficits themselves. [UPDATE UPDATE: some people are now saying Politifact is wrong (it’s a few paragraphs into the post). I give up. Can we just call Walker a douchenozzle and call it a day?]

If you had any lingering doubts that Wisconsin is part of a broader movement to attack workers’ rights,  it’s important that Americans understand that Walker is in tight with the billionaire right-wing activists, the Koch Brothers, whose foundation Americans For Prosperity is picking ideological fights in several states:

The effort to impose limits on public labor unions has been a particular focus in Ohio, Indiana, Pennsylvania and Wisconsin, all states with Republican governors, Mr. Phillips said, adding that he expects new proposals to emerge soon in some of those states to limit union power.

Even if Wisconsin teachers manage to preserve their bargaining rights, my feeling is that the bigger picture does not look good. The forces aligned against what few unions remain are just too powerful. In this Gilded Age we live in, moneyed elites have managed to convince millions of ordinary, struggling Americans to reject one of the last means of recourse workers have left. It doesn’t really matter if Scott Walker goes down — they have the ideological vision, and the willingness to take the heat for it. Something weak-kneed Democrats might want learn from.

Here are some photos I took while visiting Whitefish, Montana for my Oregonian story. Enjoy!

Close-up of the snow kangaroo

Looking down at Whitefish Lake

EAT at the Bulldog Saloon

I didn’t get to talk much about restaurants in my article, but if you do go to Whitefish, I recommend Wasabi Sushi, Piggyback BBQ, and the sandwiches at Montana Coffee Traders. I ate cheap, but well! 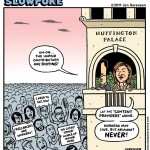 I actually linked to this video nearly five years ago, but it’s worth a replay now. The clip shows Logan being interviewed a highly condescending Howard Kurtz, who was needling her about why the reporting from Iraq was so “negative.” I came away from this very impressed by Logan, and was saddened today to hear about what happened to her in Egypt.

[UPDATE: Reading more about Logan, I see she’s made some comments about Afghanistan that suggest she’s been embedded with the military too long. But I still admire the way she handled Kurtz here.]

Travel comic in The Oregonian

Now it can be told: I have my first graphic travelogue appearing in Sunday’s Oregonian, filling a full newspaper page and a half in the travel section. But you can see it online now! This is the most ambitious project I’ve taken on in a while, and I loved doing it. I’ll be posting some photos of the trip here soon.

Last week’s comic about the domestic use of aerial drones drew a number of interesting comments from readers. Here are a couple emails I received:

The Aerial Drone comic hits particularly close to home! Our illustrious Mayor, Matthew Godfrey, has been trying to push the city council to approve a freaking blimp for surveillance purposes in our town.  It’s really smart. I think he’s trying to cover some of his more sinister ideas by pushing this asinine idea out in front.  I’m pretty sure our criminals run much faster than the blimp can fly.

TPM has more on that here.

In the second frame you have “Soon businesses jump on the bandwagon.” Here in my local Rite of Shoppes and the APe, they already have. Next to various products on the shelves are little boxes that extol the virtues of kitty crunchies, toilet paper, etc. These have a small video screen and a speaker to spout their drivel. They are motion sensor activated and trip when one gets within 3 feet or so of them. Life imitates art or vice versa….. None the less it is spot on.

Wow, I hope that doesn’t catch on further.

This Week’s Cartoon: “Year of the Mombies”

While much of the news media was rightly focused on Egypt last week, your friendly GOP-led House of Representatives was busy introducing a truly heinous bill called the “Protect Life Act.” This bill would allow emergency room doctors to let a pregnant woman die rather than perform an abortion to save her life.

This isn’t the pipe dream of some lone Bible-Belt crackpot from Upper Butt Scratch. The “Protect Life Act” is co-sponsored by one hundred Representatives, among them such right-wing luminaries as Paul Ryan and Ron Paul, whose libertarianism conveniently ends where ladyparts begin.

You know, we fight these battles year after year, and instead of seeing reason gradually prevail, we have a situation where the opposition only grows more radical and monstrous. It’s only a matter of time before these people are really running the show, and I shudder to think about what will happen.

On a cheerier note, look for one of my cartoons in the current issue of Ms. Magazine! 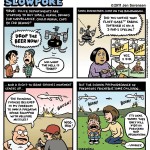