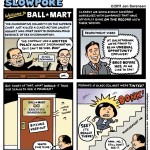 This Week’s Cartoon: “All Food Recalled”

If this one looks a little familiar, that’s because I drew it during the Great Peanut Butter Scare of ’09. I didn’t need to change a thing in order to use it again.

I’m not recycling it out of laziness, though. I’m having knee surgery on Friday, and trips to the doctor and other knee-related activities have hampered cartoon production. I’ve been avoiding talking about it online because, frankly, I’m tired of thinking about knees (which were designed by a complete idiot, by the way). But I suppose you faithful SlowpokeBlog readers deserve to know.

For the second panel, I was trying to think of the grossest things one could possibly find in a food processing factory. What sprang to mind was the time I was in a grocery store in Pennsylvania, and I thought to look at the ingredients on a tin of scrapple. And there I saw it: the word “SNOUTS.” Snouts, I tell you! That’s where they wind up! As you can see, that moment left an indelible impression on me. Seeing as fresh snouts are apparently perfectly edible, I made the snouts in my cartoon rotten and slick with Astroglide, as though employees had been engaging in some very strange kink right next to the conveyor belt.