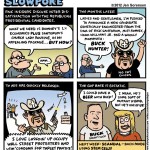 Illustration for the Dallas Observer. 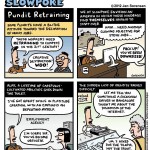 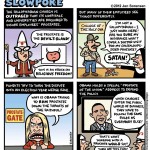 Few things are as grating as watching pundits like David Brooks get on a sanctimonious high horse about contraception and religious freedom, as though they were one with the salt-of-the-earth faithfolk. No matter that religious groups can be quite energetic about dictating public policy for those who believe differently than they do. If anything, forcing employees to conform to your religious beliefs seems to violate their freedom of conscience. It’s not like the owners of Catholic hospitals and universities are being forced to pop the Pill themselves, or shtup with a government-mandated jimmy hat. Somewhere high above, the aliens are laughing at us.

And yes, my rendering of the Fallopitarian bishop is partly inspired by the Church Lady.

Exploring my outdoorsy side once again, I’ve got another travel piece in today’s Oregonian. “Community spirit, Portland expatriates keep Galena Lodge aglow in the snow”

Lately I’ve been illustrating the Dallas Observer’s local political column, written by Jim Schutze. Jim’s column is something of an institution,  so it’s an honor to be providing the visuals. I’ve learned a lot about the Dallas political scene in the process, and can only say that Molly Ivins was probably right when she declared Texas politics the “finest form of free entertainment ever invented.” Here are a couple recent ones; I may post more eventually.

Column on FEMA certification going to an unqualified public official 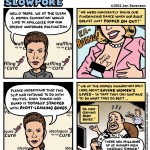 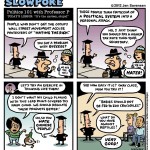