The Right to Bear Bags 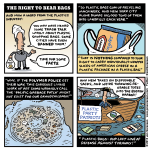 I happen to live in a city (Austin) that passed a bag ban, but not without pushback from the American Chemistry Council, the benignly-named lobbying arm of the nation’s chemical manufacturers. The group has a penchant for meddling in local efforts; it also successfully fought California’s attempt to list BPA as toxic.

Here in Austin, the transition went smoothly, and commerce continues as usual. Not that you’d know that from the bloviations of a Texas politician (R, natch) calling for a Shopping Bag Freedom Act. Speaking for myself, I have enough canvas tote bags for a year’s worth of groceries.

The Trayvon Martin decision was announced just a bit too late for my deadline this week. As it turned out, I was already working on a cartoon about a different court case — less tragic, but similarly mind-boggling in its outcome. The Iowa Supreme Court, which you can see in all its demographically-limited glory here, actually ruled for the second time that a male dentist could legally file his female assistant because he found her too attractive. Via TPM:

“Coming to the same conclusion as it did in December, the all-male court found that bosses can fire employees they see as threats to their marriages, even if the subordinates have not engaged in flirtatious or other inappropriate behavior. The court said such firings do not count as illegal sex discrimination because they are motivated by feelings, not gender.”

Maybe in the past attractive people have had advantages in the workplace, but no longer in Iowa! 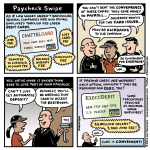 I had no idea this payroll debit card nonsense was even happening until recently, when news broke about the McDonald’s employee who sued because she wanted another payment option. (The McDonald’s franchise targeted by the lawsuit has since agreed to offer a choice.)

Also quoted in the NYT piece is another employee:

Devonte Yates, 21, who earns $7.25 an hour working a drive-through station at a McDonald’s in Milwaukee, says he spends $40 to $50 a month on fees associated with his JPMorgan Chase payroll card.“It’s pretty bad,” he said. “There’s a fee for literally everything you do.”

Even if a worker managed to avoid incurring fees at that rate, $150 a year skims 1% off the income of a minimum-wage employee bringing home $15K annually. Just when you thought our current gilded age couldn’t get any worse! 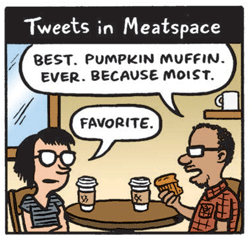 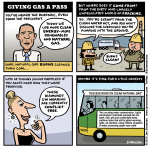 I’m glad Obama gave a speech about climate change, but his ringing endorsement of natural gas development was disturbing. While a good portion of the speech was devoted to praising and defending natural gas, not once did he use the word “fracking.” He allowed that “sometimes there are disputes about natural gas” and said something about “modernizing” the infrastructure, but unless he has some radical new technology up his sleeve, this was a pro-fracking speech. Perhaps he hasn’t seen the devastating documentary “Gasland” yet. Having just watched it myself a few days before the speech, I’m having trouble squaring his statement “I refuse to condemn your generation and future generations to a planet that’s beyond fixing” with the irreparable mess being made right now.