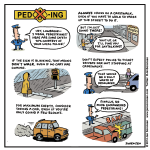 As noted here, police apprehended a female jogger during a jaywalking sting in Austin last week, startling the woman, then proceeded to drag her to a squad car and arrest her for failing to produce I.D.

I was reminded of this article from a couple months back about the L.A.P.D. busting pedestrians with $197 tickets for stepping off the curb seconds after the “DON’T WALK” sign had started flashing. $197!

I’m not a confrontational person, but if there is one issue that could plausibly lead to my being tazed by a cop, it is this awesomely stupid and unfair harassment of pedestrians. I live in Austin; the traffic is generally ghastly. People traveling on foot deserve encouragement and respect, not gotcha operations that slap them with outrageous fines.

And what selective concern about safety! I can’t be trusted to cross the middle of the street when no cars are coming, but talking on a cellphone while driving is legal in many places. But hey, if you’re proceeding on the “WALK” signal when a distracted driver turns into you, it’s no problem, right?

I realize there are pedestrians who do unsafe things like wandering across highways drunkenly in the middle of the night, or obliviously crossing at a green light in front of traffic. Police should be focusing on these egregious cases, not the majority of people going about their business without posing real safety risks. And again: while I don’t know what the Austin fines are, L.A.’s $197 is way too steep, with the potential to cause hardship for many people.

The Dignity of Work 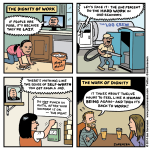 Politicians are constantly moralizing about the “dignity of work.” I’m all for being able to pay the bills, but I find the phrase condescending, as though people in need of the social safety net don’t quite grasp the concept of a job. And plenty of jobs are lacking in dignity; I’ve worked a few myself.

While doing some image research for this cartoon, I made a fascinating discovery. Did you know the Porta-john industry has its own trade publication, Portable Restroom Operator Monthly? Or that the 2014 Pumper and Cleaner Expo, billed as “the largest annual event in the world for the liquid waste industry,” will be held next week in Indianapolis? Not to suggest such work is undignified, mind you. But I bet they earn their pay. 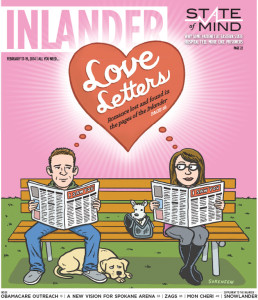 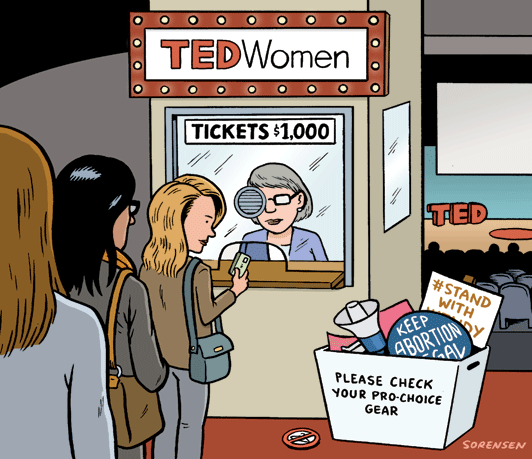 So the Affordable Care Act gives people the freedom to quit their jobs and start their own business. Or to work part-time and simply enjoy life more. The horror! It’s almost as though opponents of Obamacare want us to be chained to miserable jobs. Hmm… 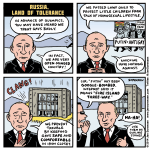 There is a case to be made that the public spotlight on Russia is useful for highlighting its human rights abuses, but it seems that once the Olympic games leave a country, things go back to business as usual (see: Beijing). If the IOC really wants the games to bring about positive change, it’s probably best to avoid oppressive regimes in the first place.