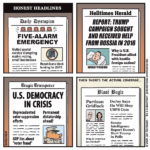 First They Came for the Mailboxes… 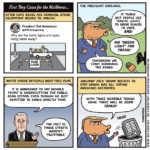 Post office aside, it’s hard to imagine Trump & Co. going quietly into that good night. Just a few weeks ago, Senate Republicans stripped language from an intelligence bill requiring presidential campaigns to disclose offers of foreign help. You would think this would be uncontroversial, but of course we have the new Senate intelligence committee report that came out today that shows a breathtaking degree of shady contact between the Trump campaign and Moscow in 2016.

Home of the grave 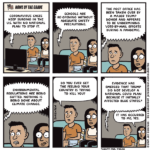 The Vanity Fair article referenced in the last panel is here. Key paragraphs:

Most troubling of all, perhaps, was a sentiment the expert said a member of Kushner’s team expressed: that because the virus had hit blue states hardest, a national plan was unnecessary and would not make sense politically. “The political folks believed that because it was going to be relegated to Democratic states, that they could blame those governors, and that would be an effective political strategy,” said the expert.

That logic may have swayed Kushner. “It was very clear that Jared was ultimately the decision maker as to what [plan] was going to come out,” the expert said.

That anyone on the White House pandemic team would suggest this is beyond scandalous. And yet, how many people know about this story? 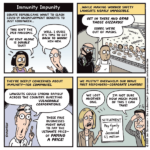