This Week’s Cartoon: “The Hoodie: Apparel of Peril”

The hoodie is about as universal as blue jeans these days, transcending practically every youth subculture. Considering that some 99.98% of hoodie-wearers are non-thugs, you’d have to be a clueless Fox News pundit to find the garment gunfire-provokingly scary.

I regret that I could not include the Great Hoodie Wars of the 7th century between the House of the Zip-Front and the House of Pullovers, as I unfortunately did not have not enough room to draw a giant battle scene.

As you might have guessed, this one is about last week’s Doonesbury strips, which over 50 newspapers refused to print. Personally, I’m surprised the number was that high. I may be an easy audience, but I thought the strips were witty and tastefully done. Thursday’s comic was intense, but it was hardly in poor taste. Have these editors not seen reality television lately? Compared to that, last week’s Doonesbury read like a Lewis Lapham essay.

Notably, this week’s cartoon marks the first time I’ve had a strip pulled in over a dozen years of drawing Slowpoke. One of my weekly papers is owned by a daily paper that decided not to run the Doonesbury strips, so the editor, who actually liked my comic, had to ask for a substitute. The layers of irony here are impressive.

For more on the Texas law, I recommend reading about this woman’s experience.

I’ve gotten a lot of great reader mail over the years, and this just might just be my all-time favorite. You may recall my recent cartoon about the Fallopitarian Church protesting prostate coverage:

Well, reader Miriam Byroade, fresh off of making a bishop costume for her young son portraying St. Nicholas in a school play, took it upon herself to make a Fallopitarian bishop mitre inspired by the cartoon.

Check out the fine detail work on those fimbria!

This absolutely made my day. 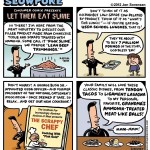 I spent way too much time last weekend reading about pink slime. I really wanted to get to the bottom of the slimebucket, if you will. This particular controversy has been burbling (and oozing and gurgling) ever since celebrity chef Jamie Oliver did a segment trashing the stuff last year (it’s a little melodramatic, but the basic sentiment is sound). McDonald’s, Taco Bell, and Burger King proceeded to drop it from their beef. More recently, a couple microbiologists condemned the goop as nutritionally-deficient, woefully-unlabeled Not Meat.

Now, I’ve traveled enough and watched enough cable-network food shows to know that gross-seeming animal parts are edible, and possibly even a delicacy, depending on the palate of the beholder. So I wanted to mentally separate the unappetizing aspect of pink slime from the food safety/nutrition issues. Here’s what I’ve discerned:

There’s a case to be made that ammoniated meat is safer because pathogens are reduced. But at the high levels of ammonia that may be required to effectively kill bacteria, the meat starts to reek of ammonia. The Times has a lengthy report on the iffy history of this particular technology.  This Prevention article also raises some good questions about what we don’t know.

Personally, I don’t want to be a human guinea pig for ammonia ingestion. It seems intuitive that schoolkids shouldn’t be, either. The fact that they have to use ammonia in the first place is a symptom of the larger problem of industrial meat production. That these scraps are teeming with deadly bacteria in the first place is a result of the appalling conditions in feedlots (or CAFOs). The meat industry, in defense of pink slime, laughably touts the “sustainability” of using all parts of the cow, as though these people give one whit about environmentally-friendly farming practices. And then there’s the fact that the stuff is just low-quality, non-nutritious crap, the logical endpoint of a system built on layers and layers of crap. Is this really the best we can do for our kids?

I’ve won a prize! The Herblock Foundation announced the 2012 Herblock Prize winners yesterday, with my colleague and friend Matt Bors taking home the grand prize, and yours truly named the Finalist. Normally, the term “Finalist” implies something trifling like “honorable mention,” but in this case, I’ve been awarded $5,000, which makes it the best Second Place ever. (Don’t even ask what Matt’s getting.) To avoid any ambiguity, from now on I’m going to refer to my award as the Herblock Prize Lite™.

It’s heartwarming to see our little genre of “altie” political cartoons finally recognized by a major editorial cartooning award. Here’s hoping my talented and deserving multi-panel peers, many of whom have been in the business longer than me, can look forward to more such recognition in the future.

The Washington Post’s “Comic Riffs” has a story here. 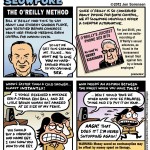