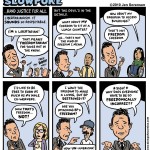 This Week’s Cartoon: “New Uses For the Gulf of Mexico” 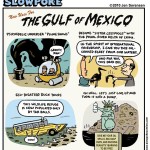 More dopey oil spill gags for your pleasure. I tried hard to go beyond current cartooning clichés, such as suggesting we plug the hole with oil industry executives, as satisfying as that might be.

I’ve noticed a tendency among wingnuts to respond to cartoons like this one and last week’s (about pre-polluted babies), with accusations that I just want to go back to the stone age. I marvel at this quaintly simplistic, binary way of thinking. As if any suggestion that we apply more reason and caution to how we do things means I want to return to a purely agrarian lifestyle living off my own yams. It must be nice to live in a world where everything fits into a neat little box.

A Wee Note About Feeds

I set up Feedburner today, and it seems to be working fine. If you were waiting to subscribe, go ahead, and if you’ve already subscribed, there’s nothing further you need to do.

From the NYT, the financial industry’s response to new regulation of debit and credit card fees paid by merchants:

And this was not an easy vote. Lobbyists for the wounded but formidable banking industry made clear to some senators that this decision would affect future campaign donations, according to people who participated in those conversations.

I guess they aren’t even trying to pretend our campaign finance system isn’t a form of legalized bribery anymore. 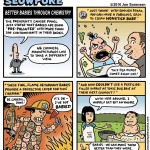 Nicholas Kristof had a good column the other day about the President’s Cancer Panel report, which declared that we need more testing and regulation of chemicals used in industry. Few people seem to be talking about this, as far as I know, but I’d say it’s one of the more admirable steps the current administration has taken. The fact that babies are now born with over 300 pollutants in their bodies is a sign of a diseased society, both literally and figuratively speaking.

A technical note about the second panel: PFOAs are a synthetic chemical used in the production of fluoropolymers, which lend special properties like nonstick and waterproof surfaces to a variety of products. So a baby stuffed with PFOAs, which are persistent toxins in the environment, would probably not have nonstick properties, although I’m thinking one coated with a thick layer of fluoropolymers might. I couldn’t explain all that in the cartoon, but you probably didn’t read that panel as scientific realism anyway. At least, I hope you didn’t.

I’m sure the toddler lawyers at Baby Rights Watch will be contacting me any day to condemn the treatment of tots in this strip.

The cartoonist hard at work avoiding a deadline.

In an unusual move for me, I celebrated Mother’s Day and the 50th anniversary of The Pill by going to my first-ever Seattle Mariners game. While the Phillies will always be my first love (sorry, Seattle, but that moose mascot can’t hold a candle to the Phanatic), I enjoyed watching the Mariners end their losing streak by trouncing the Angels. I’m sure it was my presence that did the trick. 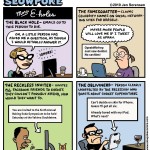 Didn’t have time to blog while I was in New York, but better late than never. If you’ve ever been in email or Facebook contact with me, rest assured that with this cartoon, I am not talking about you. It’s all completely hypothetical, of course. Except for whoever is tweeting under the handle OprahWinfrey.

I don’t begrudge people for getting excited about the iPad or their iPhone, but I’m put off by the expensive data plan, and kind of surprised so many people are willing to sign up for it. I’ve literally saved thousands of dollars by using a cheap-ass cellphone that costs me less than $10/month. And I just seek out free wifi for my netbook when I travel. Of course, I’m a frugal cartoonist, and if I had a high-paying job in a cubicle farm, I might treat myself to an iPad too.