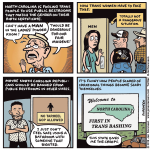 Seems like the GOP wastes an awful lot of time and money creating solutions to problems that don’t exist. Voter ID laws are one example. North Carolina’s recent anti-LGBT law concerning public restrooms is another. Now, stop me if I’m going out on a limb here, folks, but it’s almost as if Republicans have some sort of agenda against certain groups of people.

The billboard slogan in the last panel is inspired by North Carolina’s “First in Flight” motto. I’ll bet even Orville and Wilbur would be ashamed. 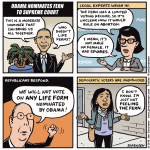 Apologies to the Honorable Merrick Garland for the comparison to a moisture-loving houseplant. I’m sure he has more going on upstairs than your average Nephrolepis exaltata. It’s just that he was not the most inspiring pick in a year when the Democrats really need to inspire the base.  The choice of Garland was likely intended to highlight the GOP’s absurd obstructionism. Perhaps he’s the only pick Dems think can make it through the blockade, somehow. While he would almost certainly be much better than any Republican nominee, it’s not clear to me that the “reasonable bipartisan” approach Obama often favors actually gets results at the polls, or in the court of public opinion. 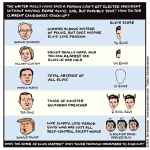 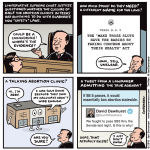