I haven’t been paying much attention to right-wing media lately, but Mr. Slowpoke just informed me that the “War on Christmas” is apparently still on. I’ve been so busy traveling and working and preparing to bake a feast and saying “Merry Christmas” to people I know who celebrate Christmas, I didn’t even notice! Anyway, I thought I’d share this cartoon from the Great Christmas Battle of 2005.

(PS: I received an early Christmas present in the form of having a cartoon published on NPR.org yesterday. I think I may have a cartoon in the LA Times this Sunday too!)

Thought I’d share something fun I created recently for Geeks Who Drink, a company that puts together pub quizzes. It’s a rare foray for me into the realm of scatological humor, but as a dog owner who spends a fair amount of time wielding a poopsack, it came naturally. Nixon is also fun to draw.

How well do you know the presidents' dogs? No Googling! 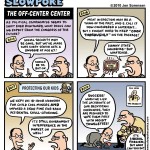 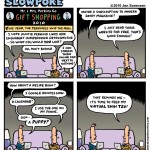 A holiday tradition continues, as we peek in on the Perkinses once again while they shop for Auntie Perkins and themselves. This year they are shopping online, and having some difficulty in an age when so many things have become “free” — not to mention existing only on an ethereal plane. Fortunately, they haven’t digitized underwear. Yet.

Previous strips in the series are here.

Two years later, I find it interesting to read what I wrote about Obama on the eve of the 2008 Virginia primary:

Tomorrow is the Virginia primary, and for the first time ever I am considering intentionally not voting… The trouble is, neither Obama nor Hillary have shown solid progressive leadership. Both of them pander to the right to the point of grotesquery. I could almost forgive Obama his weak health care plan even though that issue is extremely important to me, but that “Harry and Louise” ad was so wildly irresponsible, it really made me question his judgment. Wouldn’t it be nice if Obama used his rhetorical talents to promote a real health care plan? He has also repeated right-wing lies about there being a Social Security “crisis”; his praise of Ronald Reagan was steeped in gauzy right-wing frames about the ’60s, ’70s, and ’80s; and his campaign actually created an oppo page about Paul Krugman, a true-blue progressive hero whose intellectual integrity I greatly admire… Obama has been so reckless in his approach to these bedrock issues that I simply don’t trust him. Sorry to rain on the hope parade, people, but there it is.

I actually admire Obama for what he managed to accomplish on health insurance — but aside from that, I’d say my misgivings were justified. Not that you’ll ever see me as a vaunted TV pundit. 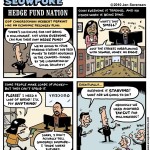 …are now available in the Slowpoke Bookshop, just waiting to be personally-inscribed by moi, and shipped off via Priority Mail for the holidays. Whomever you give them to will love you forever. This concludes our public service announcement.

Here’s something I drew for the WAM! (Women Action & Media) Radical ’80s Prom to be held in NYC on December 3. If I lived in New York, I would TOTALLY be there. It’s 10pm-2pm at the Bowery Poetry Club; proceeds benefit ladyfolk in the media. More info here. 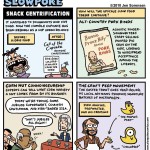 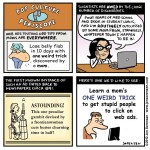