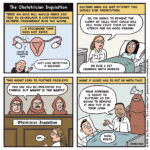 The Collapse of Retro Trends 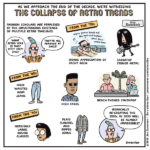 I needed a break from politics this week. I’ve been toying with this idea for a while — that the 2010s will be difficult to define aesthetically, since they’ve pretty much been a postmodern hodgepodge of previous decades. I’ve been particularly struck by the resurgence of large-ish, round wire-rimmed glasses that resemble my very first pair that I wore in the ’90s. Between this and the tackier excesses of the mid-to-late ’80s, it seems like some of the very worst style statements are now ironically in vogue. And yet, I am a fan of the high fade and Sabbathy stoner metal. And as I listened to some Steely Dan to get in the spirit of the yacht rock panel, I found myself wishing I was sipping champagne on a sailboat in Southern California in the late ’70s, forty years removed from this ghastly political moment. (You know things are bad when the ’70s malaise looks like paradise!)