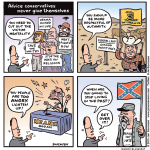 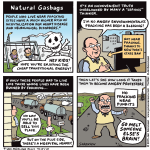 I had a great time at this year’s Comic-Con, and this year had the honor of being a special guest. They even gave me an Inkpot Award, possibly the cutest trophy ever. Of course, it’s hard not to be amused by a certain level of silliness and entertainment-industry promotion at Comic-Con, hence the light satire intended by this cartoon. Like SXSW, it’s a convention that has grown beyond its original scope, with big-budget marketing efforts for TV shows and movies at every turn. But beneath that commercialized surface, there’s still a lot of cool stuff and great people.

I’m honored to say I’m a special guest at Comic-Con this year. This means you can catch me on three (3!) panels if you’re going to the convention (it’s been sold out since forever). I have some awesome panel-mates! Here’s my schedule:

Thursday, July 9 • 2:00pm – 3:00pm, Room 9
“Spotlight on Jen Sorensen” (probably the most intimate gathering of the three)
Herblock Prize-winning political cartoonist Jen Sorensen (Slowpoke), seen on Daily Kos and The Nib as well as in alternative newspapers around the country, will show her favorite cartoons and discuss her other job as comics editor for Fusion, a startup from ABC and Univision.

Friday, July 10 • 1:00pm – 2:00pm, Room 9
“Comic Strips in the Modern Era”
Everyone remembers reading their favorite comic strip on a Sunday morning and what a joy it was. Find out what comic strips are up to today with Lalo Alcaraz (La Cucaracha), Hilary Price (Rhymes with Orange), Jen Sorensen (editorial cartoonist), and moderator Andrew Farago (The Cartoon Art Museum).

Note: I will be signing at the National Cartoonists Society booth on Friday 7/10 from 3pm-5pm

Saturday, July 11 • 2:30pm – 3:30pm, Room 8
“Writing Engaging Non-Fiction Comics”
Nonfiction comics are a wide and blossoming field, with lots of exciting projects emerging all the time. The genre of nonfiction comics can include biographies of important historical figures, as in Peter Bagge’s Woman Rebel: The Margaret Sanger Story; political cartooning, as in Jen Sorensen‘s short and long-form work for numerous periodicals or long-running web serials about the history of hip hop, as in Ed Piskor’s Hip Hop Family Tree. Calvin Reid (senior news editor at Publishers Weekly) will find out what it is that drew them to work in nonfiction and how they make it interesting for their readers.

Dawning of the Obvious 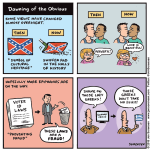 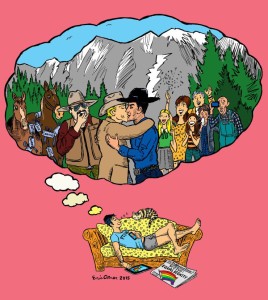 I put together a special roundup of comics and cartoons about the gay marriage ruling for Fusion, and I’m really happy with how it turned out. Many cartoonists enthusiastically went beyond the call of duty, including the legendary Howard Cruse, Hilary Price, and Eric Orner (whose work is shown here). Go check it out!