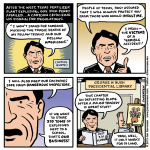 In case you haven’t heard the backstory to this cartoon, my friend Jack Ohman, editorial cartoonist for the Sacramento Bee, drew a cartoon criticizing Perry’s flagrant opposition to business regulations in light of the West, Texas fertilizer plant explosion. Perry has been visiting California, trying to recruit businesses to move to Texas, citing thes state’s lack of regulations and its low taxes. Perry fired back with a letter to the Sacramento Bee, calling the cartoon a “detestable attempt at satire” that mocked the deaths of the victims. Jack got a lot of hate mail, and even I had Twitter trolls accusing me of not caring about the lives of first responders after I defended the cartoon.

As any cartoonist knows, interpretations of one’s work may vary, but there is a point where subjectivity gives way to willful misreading. Anyone who thinks Ohman’s cartoon makes fun of those who died in West is suffering such poor reading comprehension as to be objectively wrong. This cartoon isn’t like a joke from a Jay Leno monologue — it’s serious. Deadly serious. Far from making light of the tragedy, Ohman is condemning Perry’s negligent attitude toward worker safety in the hopes of preventing more deaths in the future.

After prancing into California trying to lure its businesses away to an unregulated banana republic, Perry shouldn’t be surprised when a cartoonist in Sacramento bites him in the butt.

This whole controversy reminds me of the Tom Toles cartoon from 2006 that elicited a letter of condemnation from the Pentagon. Toles drew an amputee soldier to symbolize the worn-out condition of the U.S. Army, and was accused of making fun of soldiers themselves. Free advice for high-ranking officials angered by a cartoon: it’s generally best not to make a stink, lest you draw attention to the fact that you don’t smell so sweet yourself.

Given the hoopla over the opening of the George W. Bush Presidential Library this week, I thought I would dig up this cartoon from 2007. Seeing Bush in the media again brings back memories of how gut-wrenchingly awful those eight years were. I don’t think history will be rewritten so that Bush is remembered as a good president, but it does seem that the extremism and lethal incompetence of that administration might be partly forgotten as time goes by.

After not seeing him for a while, I noticed that Bush’s facial features are becoming slightly exaggerated with age. His nose seems a little pointier and his ears a little bigger. He’s becoming even more of a caricature of himself than he was. 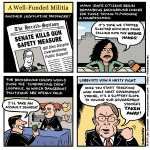 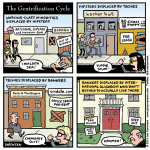 The last panel of this cartoon was inspired by a recent NYT article about the Belgravia neighborhood in London, where international jet-setters own much of the real estate. Multi-multi-million-dollar homes sit unoccupied for most of the year, leaving the streets deserted.

Here’s an idea. Let me suggest that the very finest properties be reserved for cartoonists and other artists, musicians and writers. Wealthy benefactors would take a cue from the Renaissance and pick up the tab, honored to support a rich cultural life in their city. The yuppies could then squabble over the crumbling fixer-uppers we leave unclaimed. (Yes, I’ve been spending too much time thinking about housing lately, and getting annoyed at gentrification.) 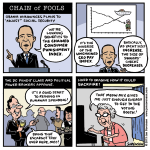 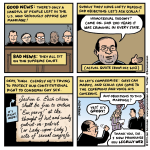