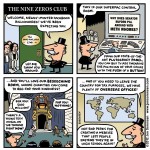 I’m too busy to write bonus commentary this week, aside from saying that it’s pretty strange whom we decide to allot Godlike power to in this country.

I have a cartoon in a cool book that just came out, Here Come the Brides!: Reflections on Lesbian Love and Marriage, edited by Audrey Bilger and Michele Kort (Seal Press). I collaborated with LA writer and performer Judy Scheer, who was fun to work with, and a natural at prepping a cartoon script (many people are really not).

The book is filled with moving essays from women with a variety of takes on relationships and the institution of marriage. Coincidentally, I turned in my final art just as crowds were pouring into the streets of New York City to celebrate the legalization of same-sex marriage in the state. More info at the editors’ blog here.

The Oregonian did a nice interview with me as part of a series on their local blog partners. What’s the most common misperception about me? Why am I leaving Portland? How do I summarize myself in a single word? Those exciting answers and more can be found with a click of the mouse!

I was going to make a “bully pulpit” joke in this strip, but then I did a search and realized everyone on the internet had already made it. A cartoonist’s life is fraught with peril.

Mitt has done some good in the past, such as the health care plan he now distances himself from. But more and more, it seems like he’s a human hurricane leaving a trail of unemployed people, bowel-voiding dogs and traumatized gay teens in his wake.

This Week’s Cartoon: “A Taxing Day at the Polls” 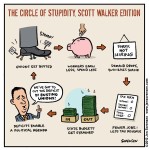 I’m growing increasingly worried about the impact of these noxious voter ID laws. Joan McCarter of Daily Kos wrote over the weekend about a lawsuit brewing in my home state of Pennsylvania, led by a 93 year-old woman who has voted in nearly every election for 60 years. She now finds herself unable to cast a ballot, thanks to the fact that the state lost her birth certificate. And Ohio now allows poll workers to refuse voters information about where to vote. And we dare to call ourselves a glorious beacon of freedom sauce? Warning to the rest of the world: DO NOT EMULATE.

The First Order of Change

I hope you’ve got those loins fully girded, per my earlier instructions. The first thing I’m changing around here is that I’m de-emphasizing the name “Slowpoke” and using my name instead, the way most daily editorial cartoonists (and op-ed columnists) do. You may have noticed this week’s strip lacked a logo. Or not. It’s pretty subtle, actually. I’m pretty entrenched with the old name, so I’m not going to start calling the strip “The Cartoon Formerly Known as Slowpoke” or anything.

Why the switch? Well, Lil’ Bow Wow eventually had to become Bow Wow at some point. (Hopefully someday he’ll just be Wow.) I’m designing a new site that encompasses all my different projects, and this keeps everything simple. 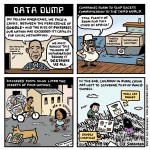 I like talking to people on the internet as much as the next person, but there are now officially too many ways to share. I can’t keep up with what my friends and colleagues are doing across five different social networks. Sometimes I feel like a bad friend. I’ve missed so many birthdays on Facebook! Now, if you’ll excuse me, I need to post links to this cartoon in five different places.