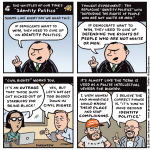 In Trump They Trust 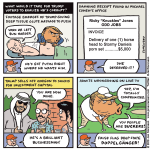 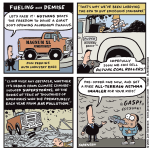 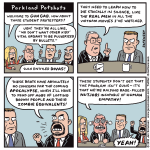 Over the past couple weeks, the right has been grasping at ever more ridiculous krazy straws in its efforts to smear the Parkland school shooting survivors calling for modest gun control reform. Rick Santorum laughably suggested that the students stop looking to others to solve their problem and do something useful like take CPR classes. Laura Ingraham gratuitously mocked student David Hogg for “whining” about not getting into the colleges he applied to. Frank Stallone tweeted that Hogg was, among other things, a “rich little bitch” deserving a “sucker punch” and a “bitch slap.” He also called him “Hogg (breath)” (yes, he went there). Ted Nugent called them “mushy-brained children” who have no soul, which is actually a mild-mannered statement as far as Nuge-speak goes. A recent widely-shared RedState article begged the students’ parents to step in and put a stop to their “bloated sense of entitlement.” The list goes on, but all these bile spewers have accomplished is demonstrating how ludicrous and extreme the right has become.