It’s the attack on democracy, stupid! 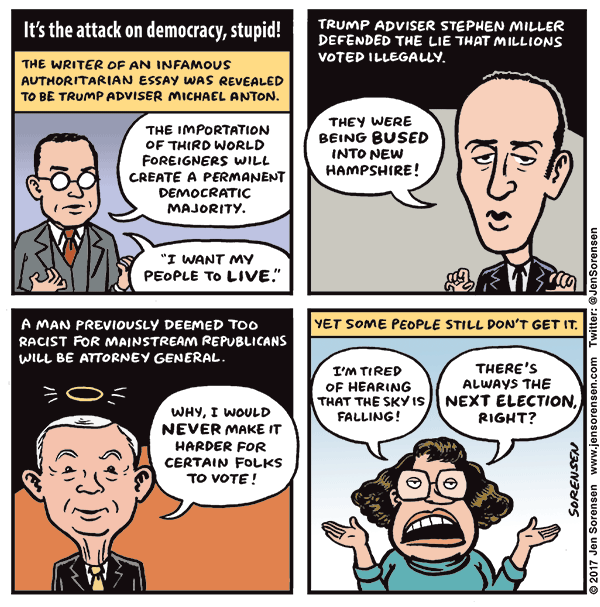 In case you haven’t heard about Anton’s eyebrow-raising essay, “The Flight 93 Election,” here’s a good rundown. In short, the former George W. Bush speechwriter (and now Trump national security adviser) equated the 2016 election with the hijacked Flight 93 heroically brought down by passengers on 9/11. He urged conservatives to “charge the cockpit” and support Trump despite the candidate’s flaws, because there was no coming back from a Hillary presidency. From the New York magazine article linked above:

“The ceaseless importation of Third World foreigners with no tradition of, taste for, or experience in liberty means that the electorate grows more left, more Democratic, less Republican, less republican, and less traditionally American with every cycle,” he writes. He describes the children of immigrants as “ringers to form a permanent electoral majority.”

Clearly America’s changing demographics have Republicans rattled, and the message they’ve telegraphed is clear: we can expect a massive assault on voter rights. And it’s hardly just Trump; the “voter fraud” myth has been perpetuated for years. This is the real Flight 93 situation for our country. As we’ve seen in places like Russia and Turkey, once you’ve gone down the authoritarian path, it’s hard to come back.

I unfortunately had to cut a panel about the stolen Supreme Court seat, which is another glaring piece of evidence that we are dealing with a revolutionary force — not a political party operating within the norms of democracy.