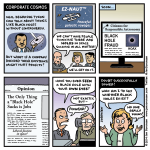 While working on this cartoon, it had not yet come to my attention that Stephen Hawking had just released a new paper in which he declared “The absence of event horizons mean that there are no black holes – in the sense of regime from which light can’t escape to infinity. There are however apparent horizons which persist for a period of time.” National Geographic and other outlets ran with the somewhat sensationalist quote of Hawking saying “There are no black holes.” However, as this handy PBS article explains:

To be clear, Hawking was not claiming that black holes don’t exist. Astronomers have been observing black holes for decades, said Joseph Polchinski, theoretical physicist at the Kavli Institute for Theoretical Physics at the University of California, Santa Barbara.

What Hawking did was propose an explanation to one of the most puzzling problems in theoretical physics. How can black holes exist when they seem to break two fundamental laws of physics — Einstein’s laws of relativity and quantum mechanics?

On a different note, an astronomer emailed me to point out that “it is actually much harder to fall into a solar mass black hole than the Sun itself because the former is just so small.” Which is an interesting point, to which I say the CEO of EZ-Naut is more concerned with appearances and marketing than scientific reality.