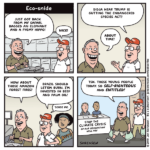 Recently I saw an older gentleman in a Trump cap trying to pay for something when it wasn’t his turn at the grocery store, and being told by the cashier that he had to go around and get in line. In fairness to the guy, I don’t know the full context of the situation (maybe he had already been through the line and forgot something?), but he seemed to be resisting the cashier’s request in a way that suggested a sense of entitlement. I found myself thinking about how this phrase is typically lobbed at younger generations as a blanket insult, and how ridiculous this is given the entitled and thoughtless behavior of so many of their elders. My point is not to engage in generational warfare — no demographic is monolithic — but when you compare someone like Greta Thunberg to the oligarchs currently destroying the planet, the platitudes about “kids today” ring hollow.

I anticipate someone will quibble with the first panel of this cartoon, arguing that elephant hunting is actually beneficial because the hefty fees paid by trophy-seeking rich dudes are used for conservation efforts. As Vox notes, the deets on that are murky:

And there’s not great evidence that this conservation tactic works. For its October issue, National Geographic investigated the claim that hunting helps conserve threatened animals. Tanzania lost two-thirds of its lions from 1993 to 2014, despite a trophy hunting program. Overall, reporter Michael Paterniti found, “what happens to the hunters’ fees … is notoriously hard to pin down — and impossible in kleptocracies.”