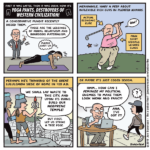 Yoga pants may seem like a trivial subject matter, but I’d argue this cultural stuff is way more important than most people realize. It’s about so much more than the pants, which of course I wore as I drew this cartoon. These ideas form our symbolic vocabulary and frame our entire way of seeing the world.

NYT columnist David Brooks is the latest in a long line of yoga pants bashers, from incels who think women wear them to torment men (one of whom committed a mass shooting at a yoga studio, you’ll recall), to a Montana politician who wanted to make them illegal, to random guys in New Zealand. Brooks adds a new angle in a recent column written from the perspective of an online extremist:

Did you really think you could raise me on gourmet coffee and yoga pants and I wouldn’t find a way to rebel against your relativism and materialism? Didn’t you observe the eternal pattern — that if you try to flatten a man to the bourgeois he will rebel by becoming a fanatic?

Ostensibly Brooks is opposing both the alt-right and the “alt-left” (whatever that is — people on Twitter upset about racism, I guess?) in this strange piece, but it reads like his usual shtick of painting liberals as decadent, effeminate aristocrats. Never mind the opulent tastes of the right-wing donor class, or the bourgeois materialism of the Republican suburbs, or the moral travesty of polluters hastening the death of the planet. It is the gourmet coffee and yoga pants leading us to our doom. Which makes me wonder: Does David Brooks only drink Folgers Crystals out of solidarity with the working class? I’m guessing not.

Back to the yoga pants for a sec. It’s ironic that a form of exercise that increases strength and flexibility could be spun as some kind of cultural weakness, but women are used to having our interests diminished as “chick flicks” or “chick lit.” Anything that could be perceived as emasculating is mocked as silly and inferior. The alt-right has its origins in reactionary opposition to women’s empowerment, and equates the liberalization of America with feminization. David Brooks is actually very much in line with this school of thought, though with a more polite pseudo-intellectual veneer.