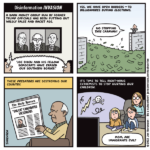 As this excellent column by Will Bunch explains, the organization responsible for these ads that are running during baseball playoff games on Fox Sports is a shadowy dark money group called “Citizens for Sanity” that is at least partly composed of former Trump administration officials with ties to notorious immigrant-basher Stephen Miller. This dangerously dishonest and inflammatory propaganda is simply incompatible with democracy, and it’s likely not a coincidence that it was allowed on a Rupert Murdoch-owned network. Having just finished Ken Burns’ epic documentary about US attitudes toward Jewish and other immigrants during the Holocaust, it’s especially harrowing to see some of the same ugly rhetoric resurfacing.